Trude Goldschmidt has trouble believing how lucky she was in life. Then she says, “you cannot imagine!” Throughout her life she has come across people who have helped her and have stuck with her. That has shaped her. Her face is beaming. 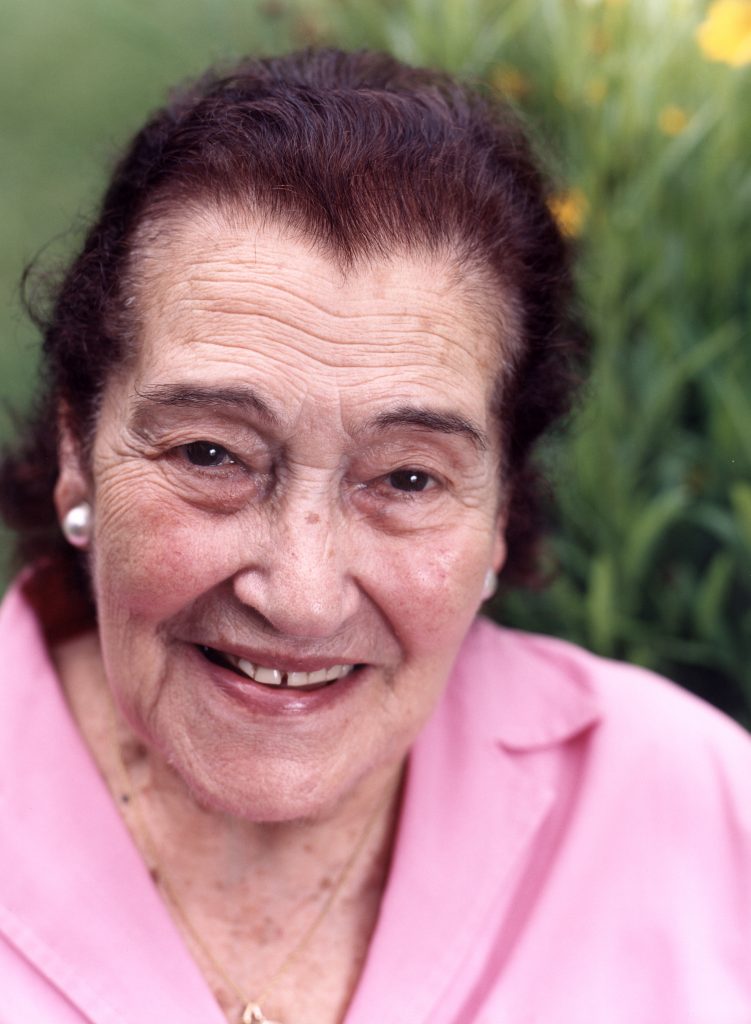 From the time she was a child, Trude was a happy person. Maybe because she was born on the lower Rhine? Trude Jacob was born on the 12th of September 1919 in Dinslaken. She starts school age five. Too early, she says today. But no harm was done. She remains a bright and vivacious girl.

But the Nazis dashed all her future plans

She wants to become a PE teacher when she grows up. But the Nazis dashed all her future plans. She cannot complete finishing school. Instead, she embarks on an apprenticeship as a seamstress and attends a vocational college in Wesel. She gets a distinction in her final exams in 1937. It was unusual that she was even allowed to train as a Jew after 1933. But to complete her training was virtually a miracle, as she says. „I had a fantastic relationship to my teacher. She was so nice, you have no idea.“ Only because of her, her fellow students were nice to her, too. Of that she is sure. Until the end, the Fräulein Kerstin held her protective hands over Trude.

All the same, she felt that she was different from the others, Trude Goldschmidt remembers and suddenly becomes solemn. “Jews weren’t allowed to do stuff anymore.” All the same, a boy who attends the same college accompanies her daily to her train. “I thought it was terribly dangerous”, she says. In spite of her fear she still enjoyed the attention.

“My parents understood nothing.”

Her worry about her future increases in spite of these positive experiences. Trude, who meanwhile had got married, wants to emigrate. But her father, a German officer, doesn’t want her to go. “My parents understood nothing.” Trude Goldschmidt, together with her husband and brother, leaves Genoa on 3rd November 1938. Only six days later the house in Dinslaken, in which she was born, was destroyed. Until 1942 her parents and a sister live with relatives in Moers, near her grandmother. Then they are deported to a concentration camp. All three lose their lives. “All, everybody. My father’s brothers and nephews, too. All of them.“
The farewell is very painful, as though they could sense that they wouldn’t see each other again. “Dreadful! Terrible!“ she exclaims. „That’s the first time I saw my father cry. It was harrowing.” But there was no way back. Trude and the two men travel to Uruguay on a tourist visa.

„These days I’d be scared to death.”

There, she was blessed with luck. While the two men are lying on the beach on the banks of Río Paraná because they can’t find work, she “once again got a lucky break.” She laughs, “There was a delightful woman, who also used to sew, and she said to me ‘Come here, my child, I’ll pass on all my clients.” And from then on she’s got plenty of work. But because her husband can’t see a future for himself in Uruguay, he moves on to Buenos Aires on a tourist visa. He decides to emigrate there together with Trude and their son who by then had been born. Because they can’t enter the country legally, the father takes his son and travels a second time as a tourist to Argentina, while the young mother stealthily crosses the Río Paraná in the dead of night, together with two young men. “That was an amazing adventure,” remembers the 86 year old. “When you’re young, your perception is different. These days I’d be scared to death.”

„And how they helped us! Unbelievable!“

In the end everything goes well and they start a new life in Buenos Aires. 1948 they’re able to legitimise their residents permits. „That’s when I got my cédula, but as a German.” She never became Argentinian. And she was also never Uruguayan, although she loves the country and people were fantastic, „you can’t imagine“, she says, as though she can hardly believe it herself. She is happy to remember those times. „We were poor emigrants. And how they helped us! Unbelievable!“ She has retained her sense of enthusiasm and believes in the good in people. Maybe that’s why she has a good relationship to Germany. She is a member of the Christian-Jewish Association and has visited her old home country countless times. And every time she has encountered people who were “incredibly nice”. She has made friends with many of them. „Bueno, many would say I am too generous towards the Germans. Yes, but then I always reply, you can’t hate your whole life.”

Every Thursday for the last 30 years, Trude Goldschmidt has been coming to San Miguel to Hogar Adolo Hirsch. Here she is able to share the luck she’s had throughout her life and pass on her positive attitude. And she enjoys doing it.