„I’m a displaced person,“ she says without hesitation. She doesn’t have to consider for long and there’s no hint of self pity when she says, ”I don’t belong anywhere.” But maybe she belongs to Hogar Adolfo Hirsch in San Miguel, at least a little, because she’s been working here as a voluntaria for over a quarter of a century, mainly looking after the kiosko. From early on in her life it’s come natural to her to be socially engaged on behalf of her own people. 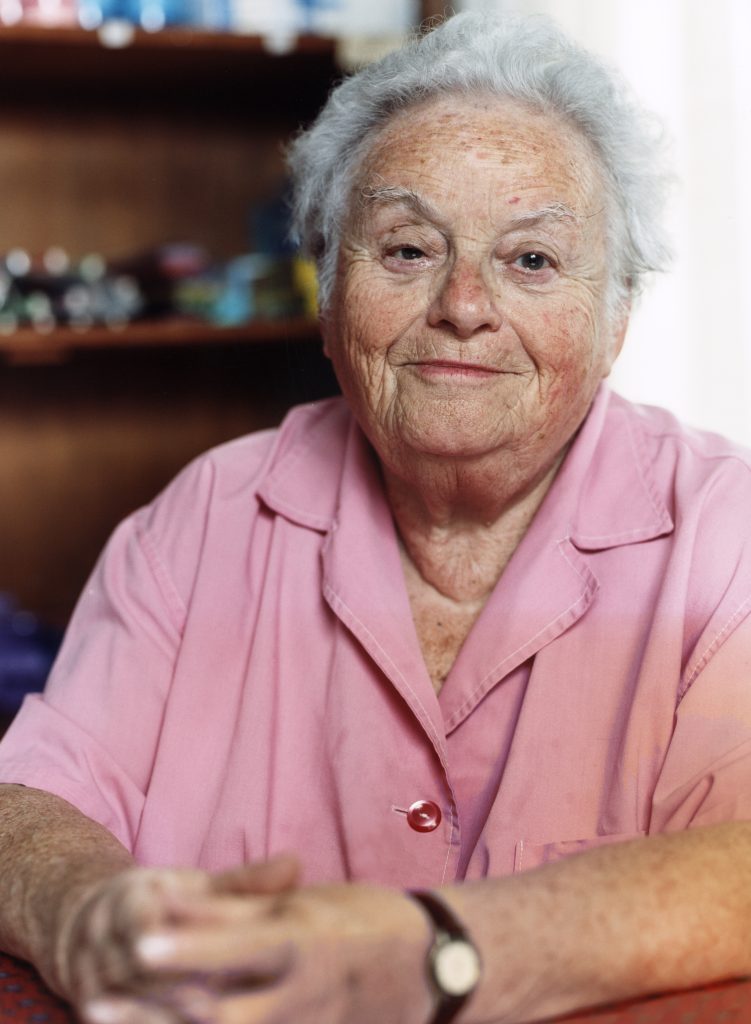 As a little girl, she collects for the ‘winter aid’ and ‘help and reconstruction’ charities set up by the Jewish Community. Back then her home is in Wiesbaden, where she was born on 7th May 1925 named Ellen Kahn.

Her childhood came to an abrupt end in 1933

Once the Nazis seize power the father of the 7 year old girl, who had been a staunch frontline fighter of WW1, was convinced that nothing would happen to him in Germany – in spite of having read “Mein Kampf”. Ellen Hamburger says that her childhood came to an abrupt end in 1933, because historical events developed differently to what her father imagined.
As a tradesman for cigars, he was unable to continue his business shortly after 1933 and Ellen herself has to leave the Lyceum after the 9th of November 1938. Her family was informed by letter. Her father doesn’t get to read this letter because on the evening of the 9th of November, he is arrested by the Gestapo and brought to Buchenwald. The now 80 year old remembers that, because he had a certificate on him which confirmed his participation in WW1, he was amongst the first, who were let go after 20 days.

“When will we get out of this hell?”

Ellen Hamburger has a vivid memory of when her father came home and said, “When will we get out of this hell?” The Kahn family takes Buchenwald as a warning and as a consequence seeks to arrange emigration. Ellen’s father is in close contact with his brother who emigrated to Buenos Aires in 1936. Ever since then, he had tried to convince his stubborn brother, to take his family and leave the country. By the time Ellen’s parents make their decision, “it’s already prohibited to send a llamada to siblings.” Neither is Ellen’s uncle able to call for her aunt in Bavaria. “The only possibility that remains”, he writes to his brother in Wiesbaden, “is for you to buy land in the Province of Misiones. Agricultural labourers can still obtain visa through the Argentine government.” But Ellen’s father isn’t an agricultural labourer.

All the same, the Uncle goes to purchase land and it takes him a second year to obtain all the licenses. In the meantime, the Kahn Family have to sell their house, in order to pay for all the fees. “It was a very pretty house. In those days people called it a villa.“ They pack all their furniture into lifts and send them to Buenos Aires by ship. Towards the end of 1938, Ellen and her parents find refuge with friends, whose house was converted into a ‘Jewish House’ after the 9th of November. It took another year and four months until they could emigrate.

Ellen’s school friends have long since given up acknowledging her. “For them, I didn’t exist any more”, she says laconically. Apart from that she didn’t experience anti Semitism in a personal way. She has started attending a Jewish school and in the afternoons, trains as a typist, stenographer and studies Spanish in preparation for her new life.
Since he’s been to Buchenwald, the father has to report to the Gestapo every Friday. He gets asked why he hasn’t yet left Germany. But the family hasn’t got a visa. “My father suffered terribly every Friday morning.” Out of fear of what might come. Ellen Hamburger says that at that time, it was down to the discretion of the consul as to whether they were issued with visas. Because the father is too scared and doesn’t dare venture outside the house, her mother travels repeatedly to the consulate in Düsseldorf. She also travels to the Hunsrück, her husband’s old home. There, she asks for an appointment with the mayor, who is an old school friend of her husband’s. She asks him to fill in a document for her husband and his sister in Bavaria, which testifies that they worked on the land, because without such a document, the consul was not going to grant the visa. The mayor “was a decent man”, says Ellen Hamburger. He does indeed issue the necessary documents, “with lots of stamps and the swastika.” By now it is April 1940 and life in Germany has become impossible for the Kahns. Then the mother risks her life. The now 80 year old mentions this proudly. She remembers how her mother says to her father, „Do you have any money left?” She travels to the consulate and says to the consul’s secretary, who apparently is his mistress, “Listen, Miss, the longer this goes on, the more difficult it is getting for us to get out of Germany. Perhaps you could put a good word in for us.” She gives her the envelope. “It was a matter of life and death. She was very brave.“ And indeed: the Kahn family obtain their longed for stamps in their passports. The aunt in Bavaria is not so lucky. “The consul there was known not to accept bribes.” She doesn’t survive the Nazi regime. 1941 she is deported and perishes in a concentration camp.

There was great fear that they were lost

The Kahn family has to travel to Belgium, because in the midst of war, ships no longer depart from Hamburg to South America. A second uncle, who lives in France, sends money for the voyage. On 10th May 1940, the ship was due to leave Antwerp. But on the same day, the German Wehrmacht marches into France, Holland, Belgium and Luxembourg. Because the Kahn family have German passports, they are arrested by the Belgian military police and deported into a camp. When it became known that women with small children were allowed to leave the camp, Ellen’s mother seizes this favourable opportunity, “I was already age 15, but I was small.” An officer gives her the passports and wants to dismiss them, “but we couldn’t go with my dad still in the camp.” The mother points to the red “J” in their passports and says, “We made it out of the hell that is Germany, but you don’t want to let us go?” The officer, who the mother surmises is also a Jew, summons the father and now everything happens very quickly. By now it is 10 o’clock and the “Copa Cabana” is still there when they finally reach the harbour. But the ship doesn’t depart that evening. It’s now not until the following day, the 11th of May 1940, that the Kahns, along with approximately 25 fellow Jewish emigrants, who succeeded to find refuge on board the ship, leave Europe in an English Convoi. Three nights the ships are anchored. One night, a German submarine fires torpedoes. There was great fear that they were lost. But the rumour has it that the captain’s family is on board which gives everyone new hope. At last, the ship reaches the harbour of Buenos Aires.

Life doesn’t allow young Ellen time to catch her breath. On the very next day, she starts attending Pestalozzi-School, because her uncle is adamant that she has to finish school as otherwise nobody would employ her. She attends school for six months and obtains her leaving certificates. The father carries on in the cigar trade and earns reasonably well, although he doesn’t speak Spanish. While Ellen settles in well and gets to like the Argentine mentality, her father never fully settles. “My father would have returned to Germany but he died in 1960.” Return to Germany? Twice she visits Germany with her husband. The first time as early as 1962. „I also went to Wiesbaden, because my mother said, I had to visit there. Her mother and her grandparents are buried there. It’s difficult to describe, but when I was there, it was as though I had something torn out of the inside of me.” In every face she recognises a Nazi. No, the idea of returning to Germany „horrorises“ her, as she says. Here, she is happy. 1950 she and her husband become legalised as Argentinians. “Which, however, didn’t mean anything“, she says drily. She is grateful to the country, „that it saved them from death“, but that’s not enough for her heart to feel Argentinian. When she says two sentences in Spanish, she says and laughs faintly, everyone asks her where she comes from. But she is no longer German, either. It is what it is. She belongs nowhere.