The Nazis made Erwin Fenner a liar. „Never in my life have I lied as much as at that time.“ Erwin Fenner had to lie, all the time. Initially, to save his own life, and later, to save that of his mother’s. 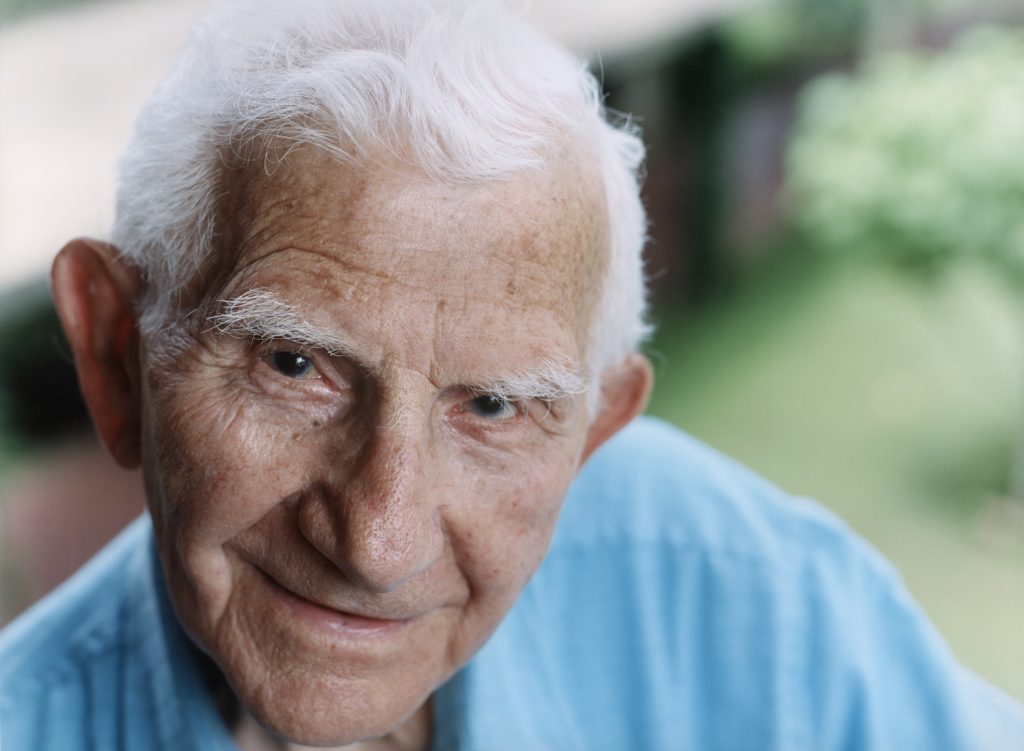 A long while before the National Socialists came to power in January 1933, he becomes aware of the change within society. He remembers his best friend telling him one day, “Erwin, I can’t talk to you any more; you are a Jew.” That was the end of a friendship. Until then, the two boys from Düsseldorf did everything together: they played, went to play sports and walked to school together. A short while later he sees his friend marching through the streets in a brown uniform. That’s when he knew.

Life had become dangerous for the youths

„I was then involved with Hashomer Hazair, a Jewish-socialist youth federation pro Palestine. We were all left wing.” Together with Christian youths, the federation tries to persuade people of their ideas through talks and flyers. “Not pro communism, but against facism, because we were all moved by the Revolution Rusa.” As an apprentice, he meets a pretty Christian girl. By now, the Nazis had come to power and life had become dangerous for the youths; but he’s determined to persuade this girl. He passes her flyers to read. Shortly after, the police arrest her. Next, the Gestapo comes to the shop in which he works and arrests him, too. “But they couldn’t find anything.” He is being accused of supplying the girl with antifascist brochures. But Erwin denies everything. “Bueno, they had a good go at me; they kept beating me but I lied, lied and lied again.” The Court at Hamm convicts Erwin Fenner for being engaged in the preparation to high treason and gives him a jail sentence of one year and nine months. No concrete evidence is being submitted. He has only just celebrated his 21st birthday.

Three times a day he has to report to the police

“I was always in doubt, what they were going to do with me once the time was up. I thought I’d be taken to the campo de concentración. But as I got out, there was a car outside with my father sitting inside. He came to pick me up, together with a bottle of vermouth.” Erwin Fenner sits upright in a chair in his room in the so-called Sheraton, the most elegant house in Hogar Adolfo Hirsch and laughs at that memory. It was a great joy to see his parents again after such a long time. But he did not feel free, he says. Erwin Fenner was no longer permitted to work. His father, too, has lost his job and his mother is very ill. Three times a day he has to report to the police. “They always wanted to know, where I was, because they didn’t hold any evidence against me.” At the next interrogation by the Gestapo, a few weeks later, he lies again. He mustn’t make a mistake, because the statements he made during the first interrogation were recorded. But Erwin Fenner has a good recollection and keeps saying the same thing over again. After the weekend, he is to report back to the Gestapo once again, an official tells him, for a line-up. “ But by that Monday, I was no longer there. By then I was on my flight to Holland.“ That was in 1936.

“I had no documentation to prove my existence.”

His flight to Amsterdam was adventurous and characterised by fear of the border guards. As soon as he arrives, he gets in touch with the Jewish committee for refugees. Though there, they don’t believe his story. “I had no documentation to prove my existence.” But they make a phone call to Düsseldorf and everything gets sorted. Erwin Fenner is allocated a pension and entitlement to stay for one month.

He has always been a good sportsman, says the 92 year old, whose former fitness is still evident. He continues to be very active and in the summer, he can often be seen at the pileta, the swimming pool. He will then be swimming his lanes which makes him feel well. Sport means more to him than fun, competition and health. Without sport, his exit to Argentina may not have succeeded. He remembers: “I went straight to the boxing rink of the Jewish Sports club. The coach saw immediately, how light I was. I only weighed 50 Kg. A typical fly weight. Bueno, we could use him, he said. Right in the first few months, I had a fight, which I won by K.O.” And then they said: “We’ve got to keep him.” From then on, he wins one fight after another. He also gets in the ring to represent Holland. Although he was defeated in this particular fight, he was now well known. “Bueno, then the president of the Jewish Club comes to me and says, “Herr Fenner, you fought well for us, perhaps we can do you a good turn.” Indeed they grant him a residency permit, but a year down the line, even Holland is no longer safe for him and he travels with his Dutch papers to Paris. In France, I took the next boat direct to Argentina. That was in early 1938.

“I never lied that much before in order to save people, but you can’t always tell the truth.”

Being on his own a long way away from home is very difficult for him in the beginning. But he was lucky that he was able to aid his parents in following him, he remembers. Again he had to lie, in order to send a llamada. “I never lied that much before in order to save people, but you can’t always tell the truth.” Because his mother was very ill and the authorities wouldn’t have had issued a llamada for a sick woman. The war was already on for two years.
When his parents were finally on board a ship, after overcoming a host of difficulties, officials tried to refuse to let his mother off the ship. “Nobody could do anything.” Erwin Fenner still gets angry when he thinks back to this time. But with the right connections save the day for the Fenner family: “Back then I used to on and off work for a Jewish paper, and my boss gave me the address of Critica, another Jewish newspaper. ‘Tell them what’s going on here. The head of the Critica will be able to help.’ With her, I drove to the immigration offices and she asked, ‘Why won’t you let Frau Fenner off the ship?’ The director said, ‘Well, the woman is very ill and so on and so forth.’ Then she said, ‘If Frau Fenner isn’t allowed off the boat by tomorrow morning at 10am, all of Argentina will read about this.’ Hence, my mother was allowed to disembark.”

Erwin Fenner injured his arm in an accident. He was told that Hogar Adolfo Hirsch had a good kinesiologia. So initially he went there for a month’s worth of rehab. At that point he was 90 years of age. As he returned to his flat, he was back to being alone, because his wife had been dead a good while. Therefore he returned to San Miguel, to give living there more permanently a go. After a while they said to him, “why won’t you stay, isn’t it nice here!” He sent for his stuff. Since then he’s lived in San Migues and is very content.