Margarete Granat is well-known in Hogar Adolfo Hirsch, especially amongst the voluntarias. She is known to be a well-read, clever, though often surly woman. And people say she is impatient, very impatient. She’s not one for waiting. At least half an hour before lunch she sits in the foyer. Not for the sake of company, but only so that she can finish her meal quickly. She also wants to know when the interview is due to start. She keeps asking. Now that she has agreed to it, she wants to get it over with. 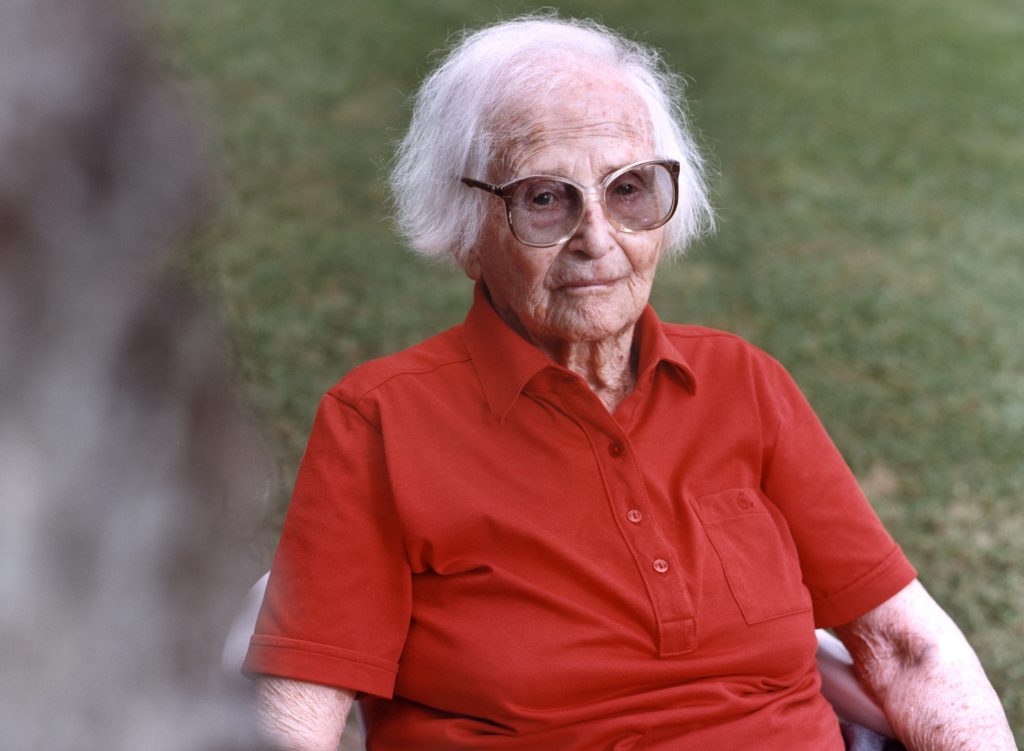 In Germany, Margarete, then still called Grete, was a perfectly normal little girl. No sign as yet of impatience. Now the short elderly lady, who wears large spectacles on her nose, sits in her unadorned room and remembers precisely all the facts that determined her life in Berlin.

"And when Jewish blood drips off the knife,…"

She was born on the 2nd of July 1912 and grew up in Assmannshausener Strasse 11a. She can remember this exactly. She also remembers the car with which her family often went for outings. One day, her family were out for another picnic in the woods “and suddenly there was this group of brown shirts and yelled ‘And when Jewish blood drips off the knife,…’ She remembers how it frightened her. Such experiences were new to the then 13 year old, because in her perception, antisemitism was not yet very widespread, especially not in the capital.

„I wanted to give birth to my child in a free country.“

But less than ten years later even there, the situation for Jews had drastically deteriorated. Of that she was very aware, she says. Grete is meanwhile a married woman and together with her husband owns a rowing boat, which is moored in a lake on the edge of the city. As often as they can, they spend their time there, out in nature in the fresh air. But one day, her husband’s colleagues advise them, “don’t come out any more. They’re going to get you.” From then on, they no longer go rowing. At that point, Margarete Garanat is pregnant. Thoughts of her child’s future plague her. „I wanted to give birth to my child in a free country.“
She and her husband were lucky. A large portion of his family had already emigrated to Argentina after the Hitlerputsch in the 1920s. They send a llamada. The young couple can bring two lifts of furniture and with the help of business contacts are able to even smuggle their car and a little money out of Germany.

„If Hitler hadn’t arrived, it would have never occurred to me to emigrate.”

All family members are able to save themselves from the Nazis but all the same, the small, delicate Berlin woman didn’t board the ship gladly. “I liked being in Berlin. If Hitler hadn’t arrived, it would have never occurred to me to emigrate.” But there was no alternative. Life had to go on.

By Christmas 1935 they are finally in freedom, but the young mother doesn’t feel free. Shaped by the Berlin of the 1920s, the emancipated woman finds catholic Argentina difficult to get used to. The 92 year old remembers: “Women couldn’t go to a restaurant by themselves.” She is still personally offended by the alleged safe space for unmarried women in restaurants and cafés, the so-called salón para familias. And she’s still incensed that women were locked away, “because Argentine men were so fiery.”

So then what is she? „Nothing“

In the end, though, in the face of everything new, she still had to settle in. However, she didn’t become Argentinian. Of course she speaks and even reads Spanish. She is also thankful to Argentine that it allowed her to immigrate, but that doesn’t make her Argentinian. So then what is she? „Nothing“, she replies soberly.
„I wouldn’t mind Germany if there weren’t so many Nazis there.“ When she watches news broadcast by Deutsche Welle and learns that there are problems in Germany, it pleases her and she thinks, “Serves them right, they didn’t want us.” And now she’s keen to know when the interview will finish. It’s time for coffee after all. Not for another half an hour, but Margarete Granat is ready to set off, in order to quickly return to her room as soon as she’s had her tea and cake.