Every day, there’s something to do: music, concerts or a film in the evening. Eugenie Josephs is still energetic at the age of 82. She loves to take part in the actividades offered in the home. She runs the library, paints and does needle crafts. She crochets pot holders, for example. Ruth Deutsch then sells them on to visitors. The proceeds to go the AFI, of course – she owes the Philanthropic Society so much. “I’ve known the AFI nearly since the moment we arrived in Argentina. They have always been helpful.” 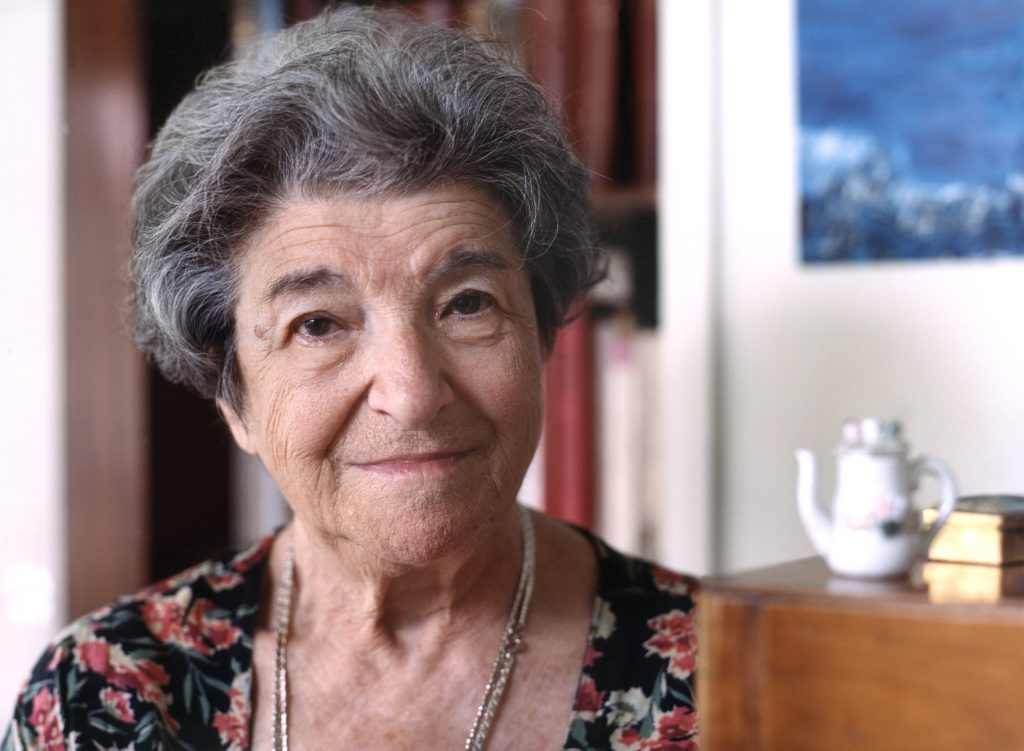 She is comfortable, where she can live as a Jewess

In February 1939 the then 15 year old embarks on her „Great Move“, which is what she calls her emigration to Argentina. She never missed Berlin, the city of her birth, because she is comfortable, where she can live as a Jewess.

Until her departure she lives in a house in which only Jewish families live. The landlord, too, is a Jew. She attends a Jewish school and has only Jewish friends. The Schreiber family (her maiden name) only engages with fellow Jews. “We only socialised as a family”, she says. A family of tradition. She explains that the name Schreiber derives from the profession of her ancestors. The men, and her grandfather, too, had been so-called Sofer: scribes of Thora scrolls. All of them very eminent men from Posen, or to be precise, from Gnesen in Posen.

Her Grandfather and his wife and his many children moved to Berlin, because he wanted to give his children better chances in life. Eugenie Joseph’s father was choirmaster of a small synagogue in Berlin-Neukölln. He had met Eugenie’s mother whilst imprisoned in Siberia and got married to her after the war in China. Eugenie Joseph’s sister was born there in 1919. Four years later, on 7th October 1923 the younger sister was born in Berlin. Though it hardly matters where the family lives: Jewish is Jewish, no matter where. This experience helps her later in life to cope with her departure from Berlin.

After 1933, life for the Schreiber family changes radically, even though Eugenie isn’t very aware of it at the time. She doesn’t experience any rowdy behaviour. The pogroms of the 9th of November also leave virtually no imprint on her. “I only heard about it,” she says. She never even saw a synagogue burn. A possible reason for this is that in November 1938 she no longer goes to school as the family were making preparations for their departure. The lifts of “study, bedroom, dining room and the books my father had, and so on, dishes, everything, everything” had long since been sent to Hamburg harbour.

The old lady says that her father read “Mein Kampf” back in 1933 and was therefore conscious that he had to bring his family to safety. An aunt travels ahead to Argentina and, a year later, sends a llamada for six people. An uncle and his wife were to travel with Eugenie and her family. On 9th November, this very uncle was deported to Sachsenhausen. “My father was able to discover where they had taken him.” He presents all paperwork, the tickets for the voyage and everything else the Nazi bureaucrats demand to see. The Schreiber family cannot emigrate without the uncle. The Llamada is valid only for six people. „I loved my uncle dearly. Such a distinguished and upright salesman. A real gentleman“, she gushes even today. But when he emerged from the camp, she says, “he was a changed man.” Never does he talk about the camp, “Nunca. Never.” From then on he was a broken man, his niece says today, “and he died six months after arriving in Argentina.”

“Everything felt very familiar to me. I only changed apartments.“

For the 15 year old Eugenie, who now calls herself Eugenia, life goes on. And nothing much changes. “Everything felt very familiar to me. I only changed apartments,“ she says and remembers that her parents rented a large apartment in order to run a small guest house. They had bought their china back in Germany. The guest house is running well. Eugenie and her sister serve food and help in the kitchen. Their guests are exclusively German Jews – the girls have virtually no contact with locals. Eugenie does study Spanish at night school, but early on has no need for it. When she loses interest working in the guest house with her parents, she learns how to embroider in the business of a family with whom they were on friendly terms. When her eyes can no longer stand the strain of this demanding work, she goes to work in an office as a secretary, again in a German-Jewish company. “They were also immigrants.”

Eugenie marries a man, who again, is also an immigrant. She has children. She likes the country in which she now lives. She likes the people, the generosity, the vastness and the richness of the country. “A seed falls on the ground and immediately, a tree emerges.” A good country to lead a good life.
She never became Argentinian. But she isn’t German either, she says. For her, being Jewish, is her only reality. So it followed naturally the she should go to San Miguel, when, eight years ago, she was no longer able to care for her husband by herself. He, too, lives here, she says, but in his own room, because he is not very well. All the same, Eugenie Josephs feels very happy in Hogar Adolfo Hirsch. She thinks that this is the best place for her as a Jewess with a German cultural background. It is here that she feels at home.