"Ruth Anker, the beautiful Jewish girl!" said a teacher who recognized her when she visited Hamburg several years ago. She enjoyed that. She was also pleased that she has not been forgotten in the city she says she loves. That's the first thing she says. "I love Hamburg.” That's the first thing she can think of when she thinks about her life story. It's difficult for her to talk about it. The memory fails. She is 91 years old. It's hard for her to remember everything, but her feelings are very present to her. 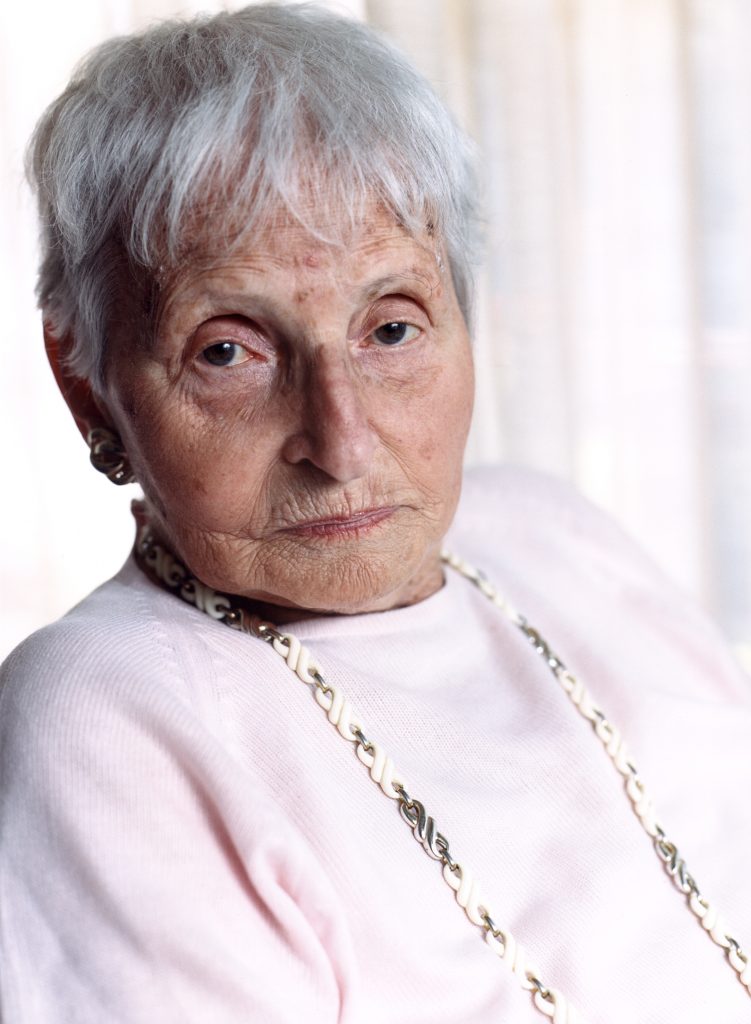 On October 13, 1914 she is born in Hamburg. In the middle of the First World War. She meets her father for the first time when the war is over. "I recognized everything about dad. But not his face." The industrial family Anker lives in Woldsenweg in Eppendorf. The factory is in Barmbek. "He fabricated things," the father. What exactly, she does not remember. He was efficient. "Just as proficient as my son is today." Ruth Vogel is a very proud woman. In her wheelchair she sits as upright as possible. She tells how beautiful it was in Eppendorf. "We played in the street."

The walls of her room in the retirement home are full of pictures by the Hamburg artist Heinrich Stegemann. Landscapes. Cityscapes. Scenes from a past time. Memories of a good time. Memories of her hometown. But with the seizure of power by the Nazis, the idyllic life is over. "The factory was later expropriated," she says, and one can only guess how hard that loss weighed for Family Anker.

She says that situations happened

The little Ruth Anker, the beautiful girl, at first goes to the Klara Lehmann School, then a to school for young ladies and later to Lichtwark School. "There were no plesant experiences at the time any more," she says. But then she talks about the friendship with a teacher, "her name was Else Wragel, and her husband's name was Muchow, a very well-known man." This friendship means a lot to her, even today. She says they had very bad time. She says that situations happened. What she means exactly, she doesn’t say. But she says that in these bad times Else Wragel and her husband were good to them. "She knitted the shawl I wore this morning." The friendship lasted until the death of her friend.
In 1933, the young Ruth Anker goes to London, she is 19 years old. She wants to learn english and photography. She returns to Hamburg, although the situation for Jews gets worse and worse. But her parents are there. And in Hamburg, she also gets to know her husband. "I got to know him at the Alster." Her face turns youthful, she laughs and tells that she spoke to him. "I knew that his name was Vogel, and then I approached him from behind and said," Good evening, Mr. Vogel." And he liked that, and we found out that we both had just been traveling with the same Alster steamer“. And then she invited him, „what you shouldn’t do, it’s not nice,“ she says and even today she is still proud of her courage. They fall in love, go for walks on the Alster at night and marry in 1936.

She just wants to remember the good things. There is no room for sadness

Soon after, Hermann and Ruth decide to emigrate. Both speak English very well. They also take Spanish lessons. Without problems, they start all preparations for emigration.  "A Mr. Samson, also a Jew who worked in my father's business helped us." Since Ruth's mother is very ill, the parents initially stay in Germany. Ruth and Hermann Vogel travel to London and take a boat from there to Buenos Aires, Argentina.  How was the departure from her parents for her, how did she feel? She avoids the subject wipes the questions away. She just wants to remember the good things. There is no room for sadness.

"I'm nothing, nor German either."

When they arrive in Argentina her father's cousin comes to fetch them. They are content, even if the living conditions are modest. The cousin looks after them a lot, and also the Argentinians "were always polite and nice". Ruth Vogel works as a photographer, her husband is an employee in the office. When their parents come later, they live together in an apartment. In the Hogar Adolfo Hirsch they say that she was a teacher at the Pestalozzi School. She does not talk about that. Instead, she says that she has always felt comfortable in Argentina. Nevertheless, she doesn’t feel like being an Argentinian. "I'm nothing," she halts. Her voice breaks when she says, "No German either, because they threw me out." Like Cucarachas, like cockroaches, she was treated in Germany, "We were kicked out!" Her beloved Hamburg has been taken from her, but what remained with her is her Jewish identity, "I feel very Jewish.“ At the time she would have liked to go to Palestine, but her husband didn’t want that. But Argentina is also a good place. "We finally had a home again." But now, in her old age, memory often weighs heavily on her. Then she suffers from the fact that she can no longer go to Hamburg to visit friends.

„You are not Jewish or Christian, you are human.“

She went often to Hamburg, because she doesn’t feel grievance against Germany or the Germans. "The other day I was talking about it with friends and we agreed that you are not Jewish or Christian, you are human. And my family survived. We were lucky."
But that's not why she has a positive relationship with Germany, she says and she is pleased. "It's because I love Hamburg so much."