"Do you know the Karolinenstrasse? Karolinenstraße School? That's where we went to school." Edith Sichel remembers this very well. "That was a beautiful school, muy linda! A Jewish school. She sees herself and her two sisters in the suburban train they had to take every morning. Hasselbrook was her station. "I can still remember when I close my eyes. I remember exactly how we went.“ 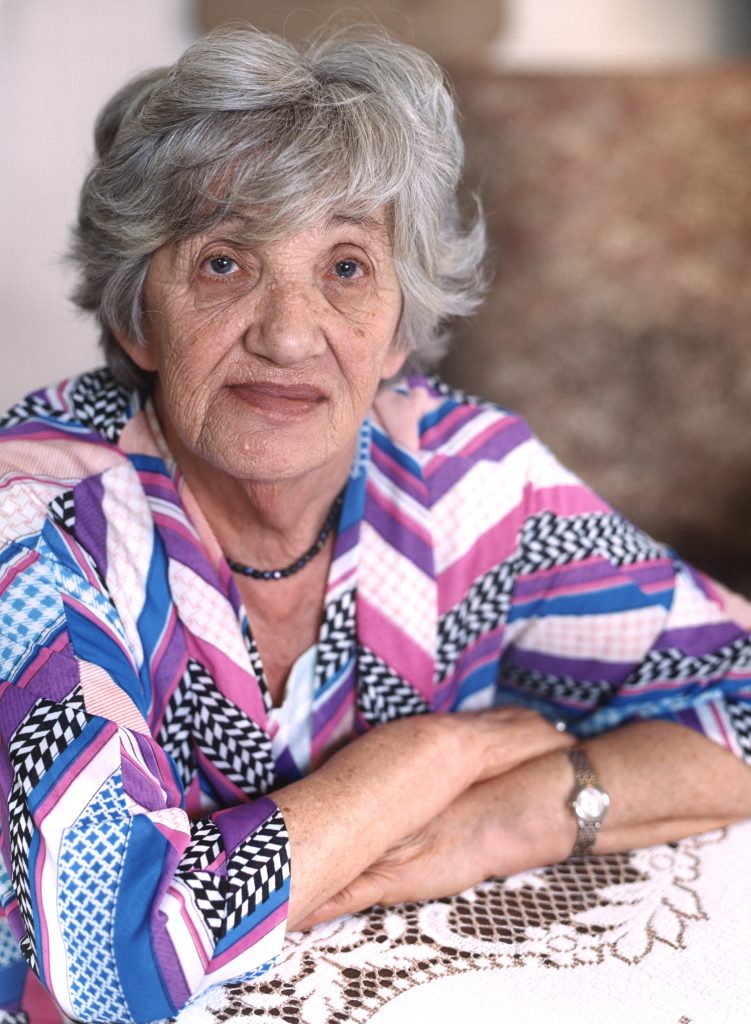 Edith Brauer was born in São Paulo on October 12, 1927. When she was two and a half years old, the family returned to Hamburg, back to their grandparents. Her father works in a department store on Mönckebergstraße. "By the name of Karstadt. I don't know, if it still exists." And she doesn't care either. Germany and the past, that's all far away. It is much more important to her that she was able to come to San Miguel after the death of her husband two years ago. She signed over her house to the AFI and now lives here.

Together with her adult daughter. "I belong here to the young women and Trixi, my daughter is like a baby around here. She's only 39 years old." As a child she had meningitis. That's why she can't speak well, "but they all like her here. Everyone is very, very good to her." This reassures the 77-year-old very much, because one day she won't be around no more either. Who would take care of Trixi then? But Edith Sichel lives in the now. "I have a nice room and I have a carefree life here". She didn't always have that.

"You're not playing with them anymore, they're Jews."

From 1929 on she lived together with her parents, her two sisters and her brother in Griessstraße 11 in the Hamburg district of Hamm. Edith and her siblings play as often as they can with their neighbours on the street. One day the neighbours say, "You're not playing with them anymore, they're Jews." "Bueno," she says, "from then on we only played at home." Karstadt had eliminated her father's position shortly after the National Socialists came to power. "They told him they were terribly sorry, but they couldn't employ Jews anymore." Now the mother has to go to work. She does the housework for strangers, washes, irons. "She had to feed four children, no! And the father stays at home. Edith Sichel remembers how he combed the sister's hair and tied her braids "because my mother had to work". He tightens the braids so that they stand out from the head. Childhood memories. One day a man comes to visit her in her memories to warn her: "Go! But for God's sake, don't say I told you, but get out of Germany, because it will be very hard for you Jews." He must have said it like this or similar. Edith Sichel's parents take the warning seriously and get the papers ready immediately. "Without this man we would surely had stayed."

Edith Sichel is ten years old when her father travels ahead to prepare everything on site. But this time the destination is not Brazil, but Argentina. Mother must provide for the four children for the next eleven months all on her own. "Pobre, the poor woman", she says and adds that she still saved some money for the children to go to the movies to see a film.

And also the children miss the movies and music

In January 1938 the time had finally come. The family enters Argentinian territory at the port of Buenos Aires. Their father waits at the pier and takes his family to the Jewish colony Moisesville. He had prepared everything with the help of the Jewish Colonization Association (JCA). In the camp, as they say, they lack nothing. The JCA lends them everything they need to live, including cows, horses and chickens. But life is hard for the parents, because they only had been used to living in the city, Edith Sichel remembers. And also the children miss the movies and music. When they are no longer children, they want to dance and have fun. So father goes to the administrador and says, "Listen. My children want to have fun. I want to buy a radio." Edith Sichel laughs, because he had to sell two cows for the radio. "That was the only pleasure we had." Soon Edith and her brothers and sisters had enough of life in the countryside. They go to Buenos Aires. Edith works four years in the household and eight years in a factory. When the parents follow, they buy a departamento (an apartment) for the family and open a shop with bombones (chocolates), good jams, everything in glasses, nothing loose. "My sister and I then ran the business. That was very, very nice." Then the sisters get married the same evening and back out of the business. Edith Sichel starts her own family. Normal life takes its course.

No, she has never been to Germany again

Edith Sichel feels more like an Argentinian than as a German. Here she is at home. She has never been to Germany again. She only knows what Hamburg looks like today from stories. "My brothers and sisters have been there. A beautiful city, they say. Great emociones." The school in Karolinenstraße has long ceased to be a Jewish school. Edith Sichel knows that. Recently she read a book about the school, "about all those who perished. Many compañeras of mine and of my sister. Terrible!“ No, she has never been to Germany again. Maybe she would rather avoid these emociones.