“Let’s not pretend, I remained a German.”

She always knew that, when the time came, she would go to San Miguel rather than into an Argentine residential home. Where else could she have gone? “Let’s not pretend, I remained a German.” She says this, in spite of having a fraught relationship with the country of her birth, as the Nazis took away those people who were dearest to her. 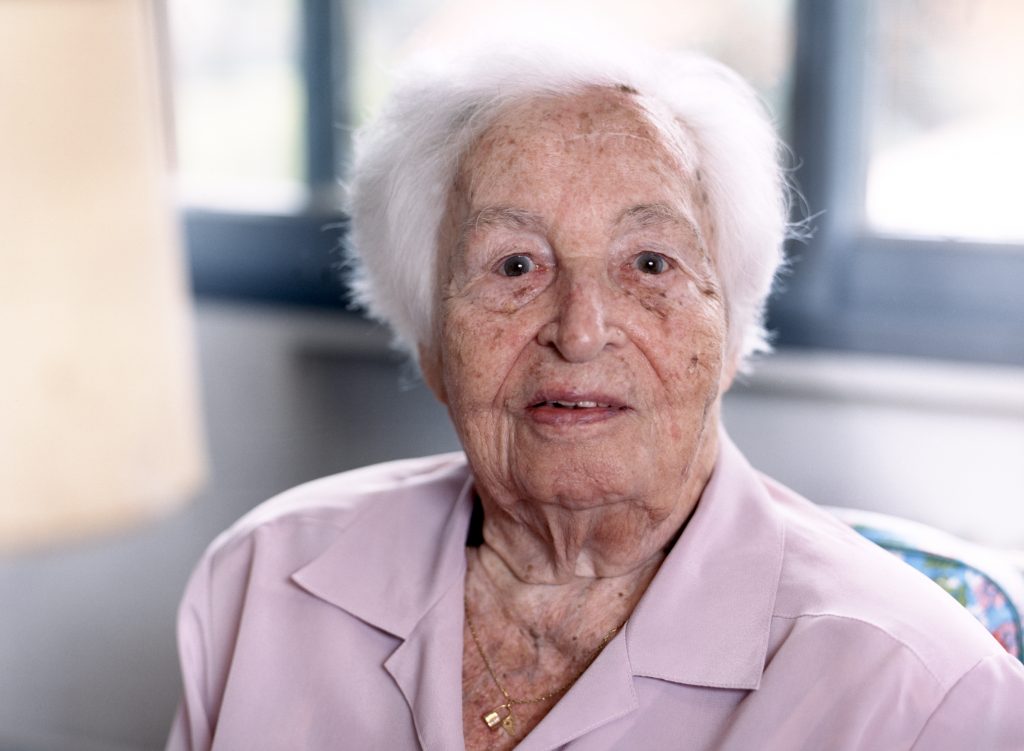 Edith Horowitz was born in Berlin on 7th June 1913, neé Edith Hochmann, and grows up with her sister Lucie in Hansaviertel, near Tiergarten. The now 92 year old woman says, her parents lived and worked solely for their two daughters: her father as a salesman and her mother as a housewife. “I had a wonderful childhood.”

When they sit together to have their meal, the conversation also touches on emigration

After finishing school, she does an apprenticeship as a seamstress – though not because she desperately wants to. “Why don’t you become a seamstress,” her mother said to her, “and when you no longer work, you can always sew a dress for your children. But if you need a job in life, you have a skill you can rely on.” A good piece of advice, as would become apparent only a few years later.
Just before her 20th birthday, Edith is able to finish her finals – just at the point when the Nazis seize power. By that time, she is already engaged. Her prospective husband, also a salesman, lives around the corner and joins the Hochmann family for lunch on days he doesn’t have to work. He’s part of the family. When they sit together to have their meal, the conversation also touches on emigration.

Edith’s future brother in law is a shipbuilding engineer who travels the world. When he visits Germany in 1935 or 1936, Edith Horowitz doesn’t exactly remember when, he urges his siblings and his mother to emigrate to Argentina or the US as soon as possible. Then he leaves, but shortly after sends llamadas, which includes Edith and his brother. But Edith struggles with the decision to leave. “It was so hard for us. We couldn’t face becoming separated from my family.“ Hence they procrastinate their departure. But the brother-in-law, who, from the outside, is in a better position to judge the situation, as she recognises today, urges the couple, “Come. Just take one bag and just come, for god’s sake!” he writes in a letter, “You mustn’t delay.” Edith realises then, that he is right. Increasingly, she’s feeling threatened.

Next we knew there were three huge men in the house

One evening, Edith, her fianceé and her sister accompany a friend to the bus stop at Hansaplatz. As they return home and are already back in the hallway, a boy knocks on their door. Edith Horowitz bangs the table and then she continues: “and my husband, friendly as always, opens the door to the boy. Next we knew there were three huge men in the house. Gigantic men, young people, who immediately proceeded to beat up my husband.” Time heals many wounds, but 70 years after the event, her outrage is still palpable. She continues how she and her sister run out to fetch help, but there’s no one around, “I’m not sure if anyone would have interfered,” she says today. Back then, she believed they would have. The beaten man escapes with a black eye. But as later transpired, the injury will lead to him losing virtually all of his eyesight. Even today, Edith Horowitz is still searching for an explanation. “I assume the men must have thought that the Jewish boy is out with two arian women,” as she and her sister were blond. Though today her hair is snow-white.

„Do you know what it feels like: strange country, strange language, no money and no one there to pick us up?“

The incident is one more reason to yield to the insistence of the brother-in-law. They decide to go to Argentina, without her beloved parents and without her sister. Hence Edith, who meanwhile has got married, leaves Germany on 12 March 1938 and leaves her past behind. But before she can begin a new life in freedom and dignity, the young couple experience the uncertainty and the strangeness of the completely unknown country. When they arrive in Buenes Aires after a 32 day voyage, no one is at the pier waiting to collect and welcome the two newcomers. It’s pouring rain. „Do you know what it feels like: strange country, strange language, no money and no one there to pick us up?“ They were shaken and helpless. A dock worker points them to the Philanthropic Society, which, however, is closed. “Of course it was closed, it was Good Friday. So we were still at a loss. But suddently a gentleman from the Philanthropic Society does turn up and things work out in the end. On the same night, the two new arrivals go to the Jewish club Bar Kochba and celebrate the Seder, at the beginning of Passover. Shortly after, they obtain a permit of immigration for Edith’s family. But it’s too late. Argentina, meanwhile has tightened the conditions of entry. A shock for their daugther, which is still deeply rooted. “Sadly, all three perished”, a loss she still can hardly bear.

But life has to go on. Edith Horowitz becomes the main earner. Her husband has little success as a salesman. All the same, they soon settle in and make a new home. Argentina becomes her ‘fatherland’. And Germany? „To be honest, why should I think of Germany? Whenever I think of Germany, I think of my family perishing, not just my parents and my 20 year old sister, but also uncles and aunts. Three cousins of mine have been able to get away, but all the rest of our large family: all of them lost their lives.” Never again did she return to Germany - but she’s not deluded: she’s lived way too long. She remained a German in spite of it all and that’s not going to change, now that she’s come to the end of her long life.