She suffered terribly, she says and she’s still suffering today

Her maiden name is Leni Ruth Plivinski, upon marriage, she became Deutsch. She was born on September 22nd, 1924, in Neustrelitz in Mecklenburg. When she was 14, she had to leave Neustrelitz – against her will. She suffered terribly, she says and she’s still suffering today. 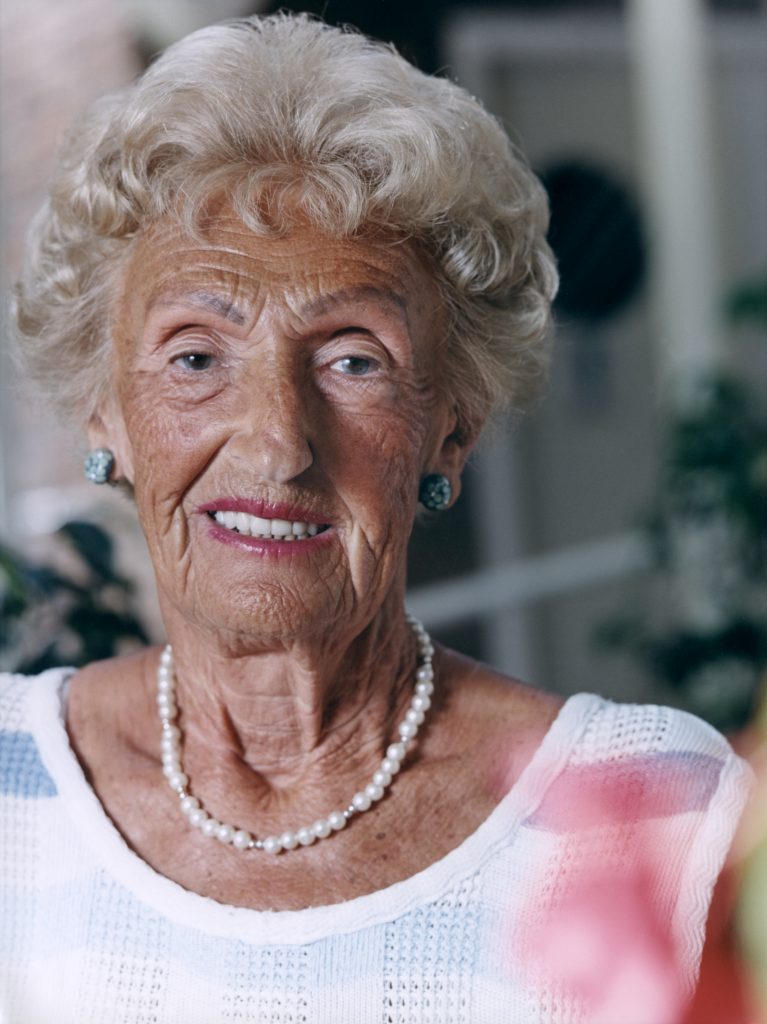 Not that you could tell, when she’s lying sunbathing by the pool at Hogar Adolfo Hirsch, or when she’s elegantly dressed, sitting in her generous, lovingly furnished room, busy sorting out sales of her home made jams and pot holders.
Ruth Deutsch lives in house 6, the so called Sheraton. Here live those that are still fit. Many years ago, the woman, who has stayed young at heart, came to San Miguel – she followed her husband here, but he is long since dead. Ruth Deutsch is deeply tanned, always wears make-up and has sparkling eyes. But, although she is content at Hogar Adolfo Hirsch, and is enjoying her life, Ruth Deutsch is still suffering to this day, 67 years after her flight from the Nazis.

She is still home sick for Neustrelitz, that little German town, and can’t quite explain why. “My parents could never understand. In 1938 they said to me, ‘you are now 14 years old, all your girlfriends have boyfriends but you’re not allowed. Don’t you understand: they don’t want you!’ The 80 year old can’t hide her sorrow as she remembers this time. With tears in her eyes she cries: “I nothing but suffered, I suffered! Till this day.”

Her mother was a courageous woman

On 13th April 1939 the Plivinski family is successful in their emigration to Argentina. A painful turning point in the life of the pretty, emotional and anxious young Ruth. Up until the end, she had feared that something might scupper their plans, that her dad might get arrested - because only 6 months earlier, on the 9th of November 1938, the so-called ‘Reichskristallnacht’ (or ‘night of the broken glass’), the Gestapo had arrested the stateless Jew from Poland. But her mother was a courageous woman. The following day she arranged to see the Konsul in Berlin. She said to him: “if you confirm that you’re allowing us to emigrate, then they’ll let my husband go! If you give us our visas then we’re gone by tomorrow. That’s all we want!”
In order to gather the necessary papers, mother and daughter travel to Schwerin. Ruth Deutsch keenly remembers this trip. The images rise before her inner eye: “The man who was dealing with our case was a real Nazi. He was fat and his face was beetroot red. Well, I hadn’t seen anything that ugly in my life. Hideous! Beetroot red with a fat neck! And he said to my mother, who had converted to Judaism, ‘why are you bothered about this Jew? You, as a German woman, you should be ashamed of yourself that you’re living with a Jew!’ So my mother replied, ‘What? I have been married to that Jew for 18 years – happily married!’ So he gets even redder and screams: ‘Clear off, get out of here and take this cripple with you!’ With that he was referring to me. To this day I am no cripple and I certainly wasn’t then!” That was her most terrible memory.

„Yes, and I even had to throw up from being so unconsolable.”

Ruth’s mother has never understood how her daughter can still be so fond of Germany. Unlike the little Ruth, she entered the ship with a swing in her step. “And I had to drag myself, as though I had to meet the hangman. Incomprehensible! Yes, and I even had to throw up from being so unconsolable.” The memory unsettles her. She cries again and again, has to pause in her narration. “It’s not that I wan’t to be back in Neustrelitz – not least because of the cold during winter! But we often travelled to Europe, my husband and I. Every year we visited. And when people here asked me where I was going, I used to say: ‘Home!’ She starts crying again, “Silly me!”