"I was born in Berlin-Moabit in the year mil novecientos quinze (1915)." So she begins to tell, the small and fine Berliner lady, who was not a Berliner anymore for the last 71 years. No, she is Argentinian, she says. And that is unmistakable, she mixes the languages ​​while telling and sometimes has real trouble to remember the German words properly. Her sister was born mas menos at the same time as she was born. Offspring of the wealthy Berlin department store dynasty Max Giesen. That was her maternal grandfather. "He was very well known in Berlin," she remembers, "because he was a great benefactor and did many good things." 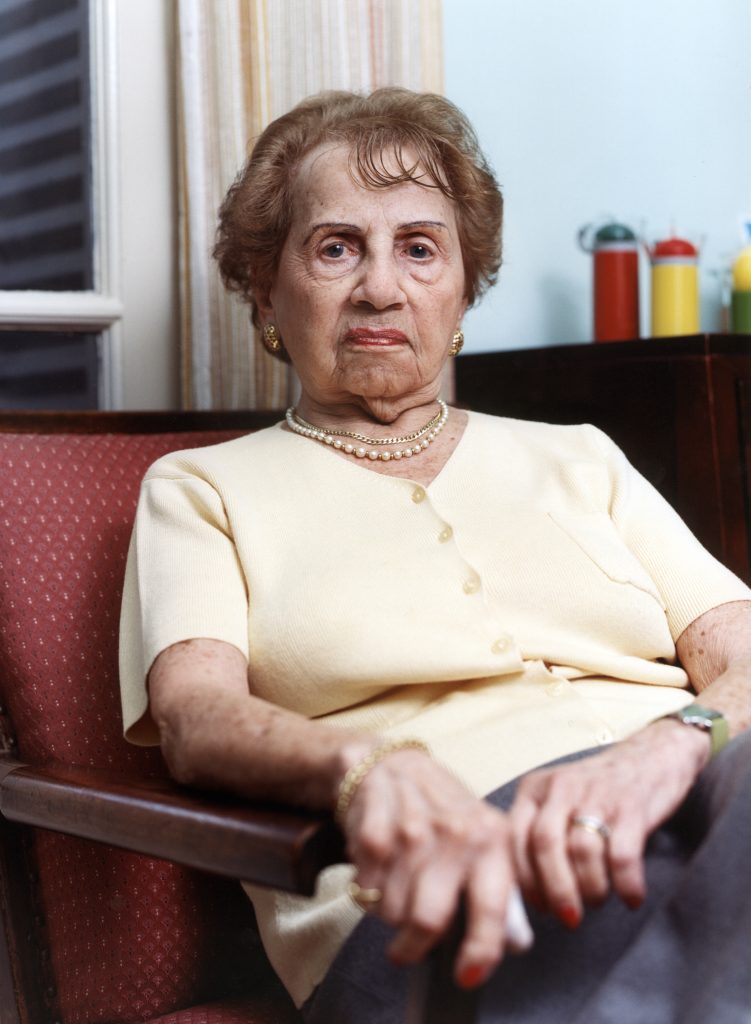 A woman of clear decisions

To do good things seems to have been her motivation when she decided to work as a Voluntaria in the Hogar Adolfo Hirsch more than 20 years ago. She became a chica del jueves, a Thursday girl, because she went there every Thursday.
She ran the kiosco. "Because business has always interested me, I occupied the place“. That's in her blood. Already as a 15-year-old she left school because she wanted to be an apprentice in the grandfather's business. I then did the training there in el mismo momento as the seizure of power of the Nazis was." At this time she was already married. A woman of clear decisions, even though she was still very young. Her husband also worked in the family department store. And when the Nazis "locked the door in our store and smeared the windows, did not allow anybody to come in there, that was claro. I could see that we have no opportunities in Germany anymore. I was 19 years old. Bueno, that's how it came about that we prácticamente backed up."

That’s not a reason to emigrate, they said, just because a madman like Hitler smears the walls

Nobody in the circle of friends believed the young couple that they were going to emigrate. That’s not a reason to emigrate, they said, just because a madman like Hitler smears the walls“. But we did not let anything stop us," she recalls, not without pride. "My husband said," We'll take our autito now and see what other people say about our situation. "So we went to Italy. There we lived together with other German Jews in a pension and asked then what they would do in our situation." They asked them if they should wait until the situation in Germany calmed down. And then they all screamed, "No, that will never get better!" She then returns to Berlin with her husband. She remembers very clearly that the image of the city had changed a lot in the meantime. "The streets were full of swastika flags and everywhere there were signs with "Forbidden for Jews ". She had already vividly imagined what it would be like if she stayed in Berlin. Then they sold everything as quickly as possible and tried to persuade the whole family to emigrate: the parents, the sister and the grandmother. Her father's sister had sent a llamada from Buenos Aires for all. "Bueno, there was nothing to stop us leaving."

The Argentinians did not put any obstacles in their way. On the contrary

But the grandmother could not be convinced. Even today, Inge Wolf is agitated when she thinks of this stubbornness, "That was a drama! She didn’t want to cross the big water, because "the water has no beams," she said. And now she has to smile, because a year later, the stubborn grandmother arrived in Buenos Aires. When that was exactly, she cannot really remember. But facts no longer matter today anyway. But she could remember her feelings very well. It was very difficult for her to leave because she had to leave her lovely life in Berlin behind. A life in the good society of Berlin, with dances and weekend excursions. She had to leave her friends behind and the department store, the beloved work in the shop. But practical as she is, she learned tailor cutting in Germany before she emigrated, and soon had her own business in Buenos Aires. The Argentinians did not put any obstacles in their way. On the contrary. "Argentina was our salvation," she says, and she says it with conviction and beaming. "Bueno and that's why I feel myself prácticamente as an Argentinian."