Lisel Wohl is ready to tell her story right away. She likes to do that every time. When she was invited as a guest in her town of birth last year, she was outspoken in her answers many times. She faced the questions of an historian in front of a large audience and hundreds of students in the local savings bank. And she was shocked at how little the adolescents know about the Nazi era. 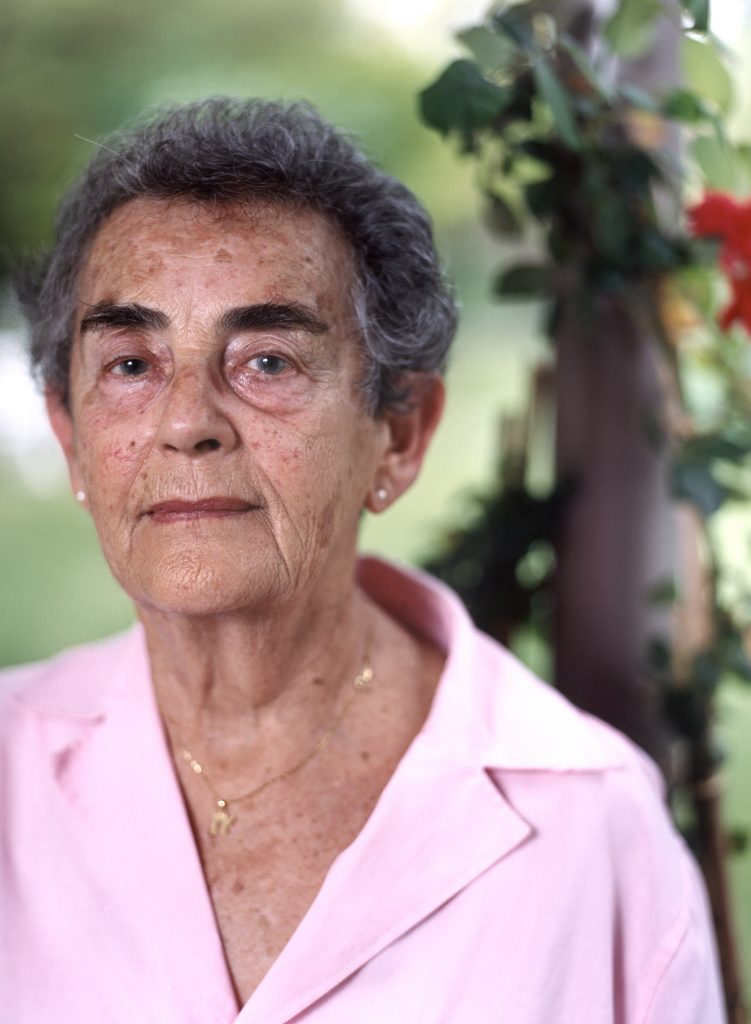 She was born in Dülmen on April 18 April in 1927 as Lisel Kahn. She lives there eleven years. No more and no less. Just enough to be able to notice a good part and to report about it. Not many questions are needed. She gets started with the hard facts of her life. "I came to school on April 1, 1933. It was a terrible day for my mother and for me, "because two days earlier Lisel's father had killed himself. The cattle dealer Kahn, who was isolated for weeks in the trenches during the First World War, suffered since then from depression. His friends didn’t want to want to do anything with him for some time because he was a Jew and there was a threat that Jewish businesses were to suffer a boycott. He couldn’t handle that.

„Stop. Close the doors. We have enough Jews.“

Even Lisel gets to feel the daily increasing anti-Semitism. During the first two years she has a teacher "who was not friendly to Jews. He did not like me. It is very sad for a six or seven year old child.”
Nothing keeps the Kahn family in Nazi Germany. Together with the grandmother, the mother prepares to emigrate. They want to go to South Africa. a distant relative of Lisel's father lives there, a charitable man, "a Herr Sonnenberg. He saved more than 100 relatives and distant relatives. " She knows that from stories. But it's already too late for Lisel and her family. "It must have been in early 1936. Then the government in South Africa said. „Stop. Close the doors. We have enough Jews.“

"Shocked and frightened, Lisel's mother becomes active again and asks her brother, who lives in Argentina since 1914, to send her the desired llamadas, the entry permits. To have a relative in a free country was a great stroke of luck, the daughter says, looking as if she wanted to ask if what she meant is clear. Although they will soon be able to possess these lifesaving documents, it takes longer than to Lisel’s mother liking for all the papers to be ready. In June 1938 the time has come. She goes to the consul in Dusseldorf, but he does’nt want to give her the visas. " My mother was terribly agitated, of course". She sends a telegram to Buenos Aires to her brother. "He knew the Argentine mentality and sent back a telegram in which he said, ‚Send Mr. Consul in Dusseldorf 2000 Greetings.’“ The mother understands and goes with the bribe again to the consul. "And lo and behold, when the passports were brought to the consul with the money deposited, the decision came immediately, the four visas are there." They have ship tickets for December. Because there is no man living in the house, the Kristallnacht doesn’t leave a trace for Lisel and her family. Only the next morning, they see what happened. "The synagogue burned at night. We had a very pretty little synagogue in the village. The religious teacher, who was also the rabbi, was thrown down the stairs and persecuted. And all the men of the Jewish community were already in jail that morning.“

"In this city they knew nothing? The synagogue burned for four and a half days. Nobody saw and smelled anything?“

Lisel Wohl says that she asked the students in Dülmen what their grandparents told them about the Pogrom Night. "They didn’t know anything, was the most common answer," she says, and you can see her outrage even today. "Then I got up and said," ‚In this city they knew nothing? The synagogue burned for four and a half days. Nobody saw and smelled anything?’“ "She knows that the children cannot help it. Therefore it is all the more important to her to transmit her story. And if need be, again and again.
She also told the students that she and her little sister were not allowed to go to school after the 9th November. "Of course we were just happy about it." She laughs, as a child you have a different view of things.

Shortly after the pogrom, the girls go to Hamburg with their mother and grandmother. The lifts with all their belongings are already at the harbor. "We were only allowed to take 10 marks per person", the same as all other Jews. Not more. Mother’s best friend accompanies the Kahn family to the ship and at the last minute wants to pin a brooch with diamonds at mother’s rope. Lisel remembers exactly how she says to her mother, "Du Elli, I'm pinning it on now. If I can save myself, you give it to me back, if not, you can keep it.“ But the mother refuses, fearing a check. A good decision, because when they go up the stairs to the ship a short time later, she is selected for a random sample. "We stood holding grandmother's hand and mom did and didn’t come back." The children are very worried about their mother. They felt her bra, the soles of her shoes, to see if she she smuggled anything. But they cannot find anything. Then she too can go on board. They travel to freedom. They never hear again anything from Mother's best friend. "That's how it was. Those are the little things to remember, no?" Fortunately, they did not lose family members.

Elisa, as she is now called, feels comfortable in the warm-hearted country

The fresh start in Argentina is not easy. Nevertheless, Lisel Wohl likes to remember the beginnings, because people were always very helpful. No one laughs at her because she cannot speak Spanish. Elisa, as she is now called, feels comfortable in the warm-hearted country.
Even 66 years later her eyes lighten up when she tells how her teacher asks her to come forward in the classroom after the outbreak of the war "and she hugged me and said, look, kids, this is Elisa.” Fortunately she was saved, because now there is going to be a terrible war in Europe and the family and Elisa could save themselves.“

Lisel is a member of Nueva Comunidad, a Jewish community founded by immigrants. In the youth group she meets her future husband. He too is an immigrant. They marry in 1947. Lisel’s surname is now Wohl and she is 20 years old. She gives birth to two daughters who live in Israel today. She met them in Dülmen when she was invited there. A great opportunity, she recalls. Many years before then, when her daughters were still "teenagers", she regularly visited her father-in-law in San Miguel. "One day they came up to me," You are the right person to become voluntaria. "At first she did not want to, but then she substituted a volunteer, on a trial basis. That's 38 years ago. "Since then, I get up every week at six and am elated that I can come here." She comes every Wednesday, excepting when she is on vacation. And maybe she's going to Germany again. Then she cannot come either.

Lisel Wohl died unexpectedly on September 17, 2005 of a heart attack in her apartment.