Lilo, as her friends call her, is a tall, imposing lady. At nearly 90 years old, she still lives in her city apartment in Belgrano, in a house that dates back to the time before there were tall housing blocks depriving people of sunlight. Belgrano has become her second home. But there are glimpses of her past. All her interiors and furniture are from Germany. Germany in Belgrano, Buenos Aires. 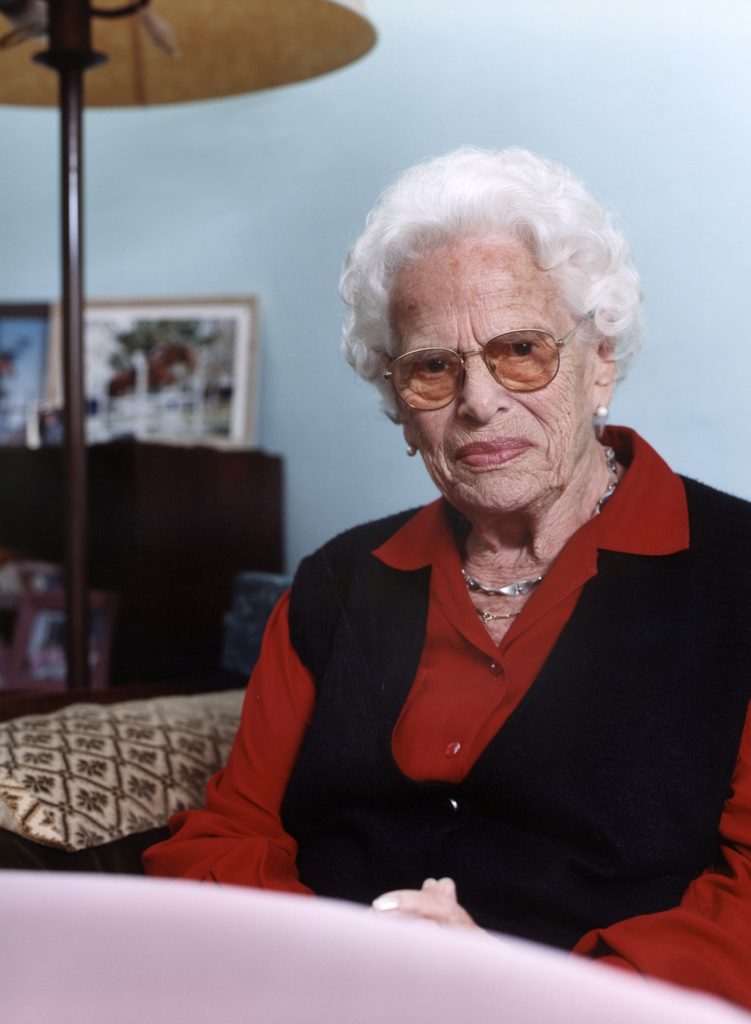 As a girl and young woman, Lilo Brummer was blond and her looks don’t comply with the nationalsocialist idea of a typical Jewess. That made her life in Nazi Germany easier, she says. She was never harassed – oh, no, she was: once, in her home town of Schweinfurt. She remembers: she had a Jewish friend with whom she was chatting in the street. A Nazi stopped her and asked why she, as a German girl, was talking to a Jew. So she told him she was Jewish herself. “That was the end of that”, says Lilo Brummer drily, whilst wearing a smile. But of course she didn’t remain unaffected by this incident.

And without her parents, Lilo doesn’t want to leave Germany

Early on, her father introduced her to socialdemocratic ideas. But he dies when she was only 12, before his political orientation can become a danger to him. “He would have had a very hard time in Schweinfurt, if he’d stayed alive.” Soon she moves to Augsburg with her mother and sister to live with her stepfather, where she can finish school in 1932. In Berlin, she will later learn to become a paediatric nurse in a hospital. During this time, the subject of emigration comes up more and more in conversations amongst her family. Her sister Ilse is the first one to leave for Argentina, because her husband has a cousin there, who calls for them. A short while later, she, too, receives a llamada from her sister. “But it was difficult, to call for my parents because her stepfather hadn’t adopted them.” And without her parents, Lilo doesn’t want to leave Germany. “We didn’t know where to emigrate to. My stepfather always said, there’s no point going into neighbouring foreign countries. He had read ‘Mein Kampf’ and knew, ‘That man will carry out his plans. We have to get a long way away.’” In 1938 the daughter leaves Germany without her parents after all. Very reluctantly, as she remembers. “I mean, I went towards security, but my parents – I was afraid of the future.” Today she can chuckle about the worries that plagued her then. After the outbreak of the war her parents did manage to escape to Buenos Aires via Chile. “Thank God we all survived!” she says and beams.

Care-free she launches herself into her new life. “Only three months after my arrival in Buenos Aires I got married.” She laughs as she considers her easygoing attitude. Contact to other Jews is always important to her. The Jewish community and the Philanthropic Association (AFI) have always played an important role right from the start. Meanwhile, her work in the German Hospital and in private homes helps her to get settled. One particular job sticks out in her memory. “The woman was Austrian and her husband was Italian. At some stage she says to me: ‘Nurse, when would you like your day off?’ So I say: ‘Any of the Jewish holidays.’ And she replies, ‘Ah, thank God you’re not a Nazi!’ And then I said, ‘I thought exactly the same of you.’ She laughs as she remembers that during the course of her life people have often assumed she was a Nazi. But she is a Jewess through and through and is so closely connected to the AFI that her son keeps saying to her she lives for the Philanthropic Association. For 36 years now, she’s been driving out to San Miguel, twice a week. There, she assists the dentist and visits residents who don’t often receive visitors. Initially, her motivation was purely selfish, she says. She worked out that someone would help look after her mother back in Germany if she volunteered at Hogar Adolfo Hirsch. Because her mother had to return to Germany due to her Asthma and lived out her life in a retirement home there. Meanwhile, instead of selfishness, she now feels a closeness to the home. “I’m attached to it. It’s rewarding. I enjoy working here.” Und she is planning on continuing until her 90th birthday. “My sons says to me, ‘Mum, if you don’t go out, you’ll age quicker!’” And clearly, she wants to remain young. She pauses, laughs and adds, “I shall follow his advice.”