“When people here in Argentina sometimes ask me spitefully why we all always speak German, then I always say: ‘I can’t help it, it’s my mother tongue.’” 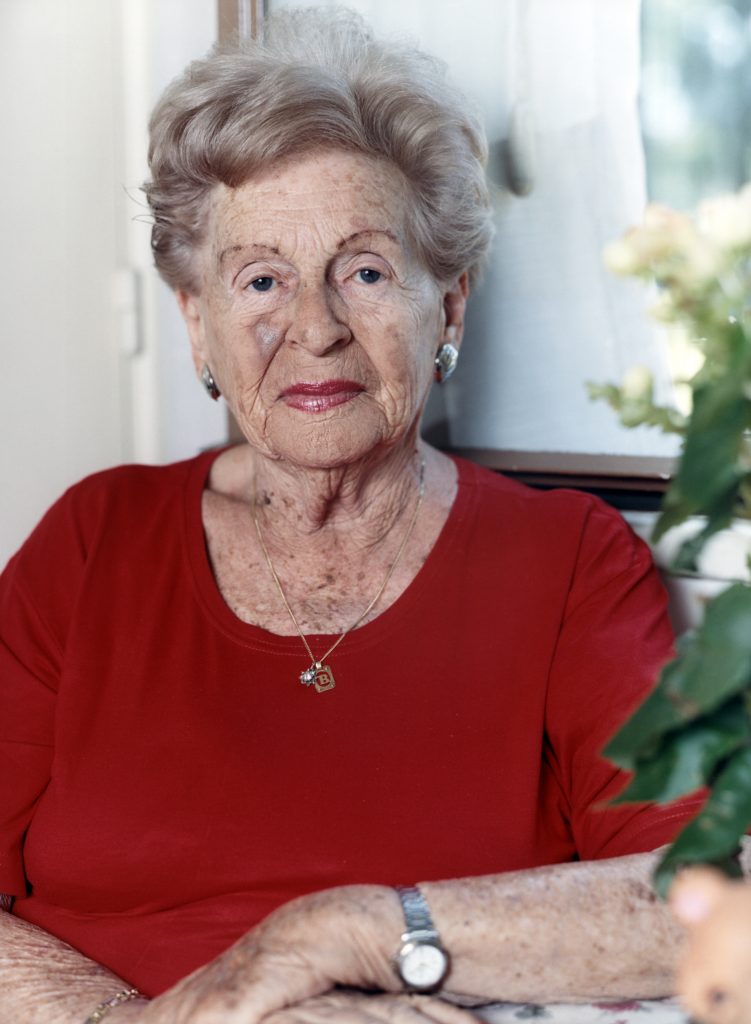 “I don’t now why I became so old. I have been through so much and shed so many tears in my life.”

Betty Dresel, a real Berliner, is 96 years old. “I don’t now why I became so old. I have been through so much and shed so many tears in my life.” Despite this, the elegant, carefully groomed lady has the air of being young. She always wears full, but subtle, make-up and is stylishly dressed. She’s lived in San Migues for four years and comments on Hogar Adolfo Hirsch: “I’ve never shed a tear here.”
Apart from having been born in Berlin, along with her three siblings, she no longer feels any connection to the place. Her father died early, when she was aged twenty. Short of opportunities, she trained to become a seamstress. “I was so unhappy. Till this day I don’t enjoy sewing.” But her craft was to play an important role in her life.

Without exception they all became victims of Shoa

It is thanks to her husband that she emigrated to Uruguay in 1939. “To be honest, I couldn’t quite comprehend it all. Without my husband, I wouldn’t have had the strength to emigrate.” She had only got married a year before. The rest of her family weren’t so lucky. Without exception they all became victims of Shoa. She isn’t one for being bitter, but “to this day I can’t say that I love the Germans.”

Buenos Aires – the city of hope

By the time it became impossibly to escape Nazi Germany, Betty Dresel and her husband had safely arrived in Montevideo. And while many immigrant women had to earn their living as house maids, she was able to get by through sewing. “I got 3 Dollars for every skirt hem. That was a lot of money at the time.” All the same, life in Montevideo meant a difficult adjustment to a new way of life for the young woman. She has to live without the comforts she was used to back in Germany. Everything was very primitive, she
remembers. But with a lot of hard work and determination they managed somehow. An improvement came in 1944, when they were able to relocate to Buenos Aires. Buenos Aires – the city of hope.

"None of us are happy, we can only be content."

Although she never considers returning to Berlin, Germany soon becomes important for her once more. Her husband returns to Germany. They separate. Her daughter, too, moves to the country of her parents, to live and work there. Betty Dresel can’t understand her daughter, but in spite of this, she often visits the country of her birth, which no longer feels like home to her. “The word ‘Home’, oh God, no! Germany isn’t my home.” She is at home in Argentina.
She’s sitting in her small, white plainly furnished room and pauses, thinks and remembers. “Recently I saw a woman who was crying. I went up to her and asked her, ‘Why are you crying?’ So she says she wasn’t happy. So I said to her, ‘None of us are happy, we can only be content.’” Every single person here at Hogar Adolfo Hirsch has endured so much, there’s no way they could be happy. “But we have to be content about every day that we can live here and enjoy the sunshine! I’m also content about my small room. I’m not missing anything! I smoke my cigarettes, my daughter’s brought me back German cigarettes. Then I’ll look out of my window and am content.”