Every Monday, for 25 years, she used to drive out to San Miguel, to Hogar Adolfo Hirsch, together with the other chicas del lunes, the Monday girls. Always carefully turned out, she always made sure her lipstick matched her top and coat, depending on the season. Many years now the chicas del lunes go without their colleague and friend Hanna, because she was forced to draw the line. It hadn’t been long before her 95th birthday and as such she was older than most residents she was looking after. It was very hard for her to give up her job as a volunteer helper. “San Miguel was always like a second home to me.” But this farewell is a good few years ago now. 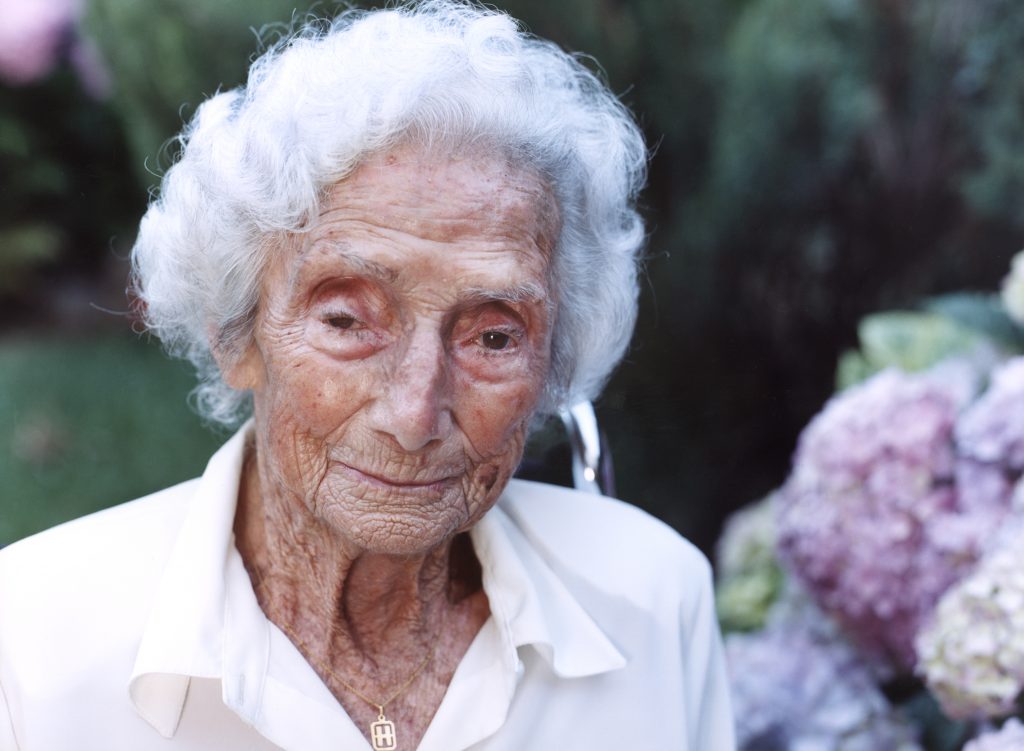 For a long time, she had been hoping to work at Hogar Adolfo Hirsch as a volunteer helper, but her husband Fritz was always against it. “He wanted me to be there when he came home from work in the evening. But when Fritz died, I asked a friend to find out whether I could come out. And those in charge said I was too old. But later on they agreed for me to come.” She remembers how she was flattered and that she couldn’t bite back the comment to say that she hadn’t grown any younger in the meanwhile. By that point she had celebrated her 70th birthday. In the Home she met people whom she had known from earlier on in her life, some even from Germany. Otto Halbrich, for example; she always enjoyed visiting him. He used to go to school with her elder brother Ludwig in Worms.

Hanna Grünwald, born Hanna Mayer in Bockenheim an der Weinstraße on 11th August 1905, flees with her husband Fritz and her two-year old daughter Renate in October 1938, because Nazis made life in Germany impossible for her. She remembers that her father spent a long time in protective custody (prison without charge and trial). Before 1933, he had reported rowdy Nazis. After 1933 this deed became an offense worthy of arrest. Hannas brother Ludwig, who works as a lawyer, loses his licence at the seize of power of the Nazis, and her husband Fritz, who is a salesman, loses his customers. No, life in Germany after 1933 was impossible, she says. “We knew, one had to leave.”

Anxiety about the advent of war was prevalent

All this is a long way in the past, but all the same she has a vivid memory of the agitation when the Argentine Consul in Hamburg finally confirms the llamadas, after a lot of toing and froing, they then go to board the French Liner in Hamburg - only to discover that the ship hasn’t shown up. Anxiety about the advent of war was prevalent. Initially they live with an uncle in Hamburg, and then with a brother-in-law in Düsseldorf, “to await further developments.” But then events escalate and they flee by train to a cousin in Luxemburg. “That was the day when Chamberlain was in Munich and people thought that war would break out.” Hanna Grünwald has a good memory. She remembers everything as though it was yesterday. Hence she remembers how distraught they were because the didn’t know how they could reach their boat. “It was an emotional rollercoaster.” Until her husband Fritz drives to Antwerp to find out that their ship will be leaving for Le Havre. “You’re coming to Antwerp at once,” he summons his wife over the phone, “The ship embarks tonight. I’m picking you up from the station.” But as the young woman who is carrying her child, arrives on the platform, he isn’t there. She leaves him a message and boards the ship alone. She relishes telling this story because everything turned out fine. She remembers how he arrived, racing up to the ship. “He stands on the steps leading onto the ship, the bell rings and the ship casts off.” She remembers that they were the only people on board, and laughs at that visual image. Back then, this scenario must have felt frightening. However, every last space on the ship is occupied by the time they have stopped in Le Havre. “And then we were off to Argentina.” The young couple have no idea what to expect of the South American country. Meanwhile, they enjoy the voyage.

By that point her brother Ludwig is already settled in Buenos Aires. This proves lucky for the rest of the family because he is able to arrange for nearly all family members to follow him. Initially, they all live together in one house. Soon, living together proves increasingly difficult. At the same time, the financial situation perks up. Hanna’s husband acquires new clients. Things are looking up.

After the war, he manages to re-establish his former business contacts in Germany.
The petit woman never felt resentment against Germany. Her contact has always been good. Immediately after the war she even sends ‘care-packets’ to a couple who are friends - “they weren’t Jews”. But returning? She doesn’t need to consider this for long. She remembers how she was scared of all the faces, when she went to Germany for the first time. “That was the fear that I wasn’t able to shake off.” But this fear soon became irrelevant to her new life. Even though her eldest daughter studied in Germany, stayed there and long since had a family of her own, Hanna Grünwald has made her life in Argentina – whilst still remaining a German.

The Asociación Filantrópica Israelita, the Jewish philanthropic organisation is part of her life as much as the afternoons playing Bridge with her girl friends or the Argentine family of her second daughter and her three children and the six great-grand children.
And the work in San Miguel was her very own affair. Her second Argentine life, as it were. “If just one lady was pleased about my Monday visit to San Miguel, then the day has been worth while to me. Then I feel that I’ve achieved something. I always came home feeling contented.”