She was a child when she left Hamburg. She was only four years old. But when she returns to the city of her birth for the first time, she can remember more than she expected. She has no problems locating the apartment in Schlüterstraße 81 and can explain to her husband exactly which one was the living room window and where her aunt’s grand piano stood. She didn’t want to ring the bell. She can also remember the tennis courts at Rothenbaum. Relatives lived here prior to 1933. Childhood memories of trees and houses. Only images. She has no stories connected to these images. 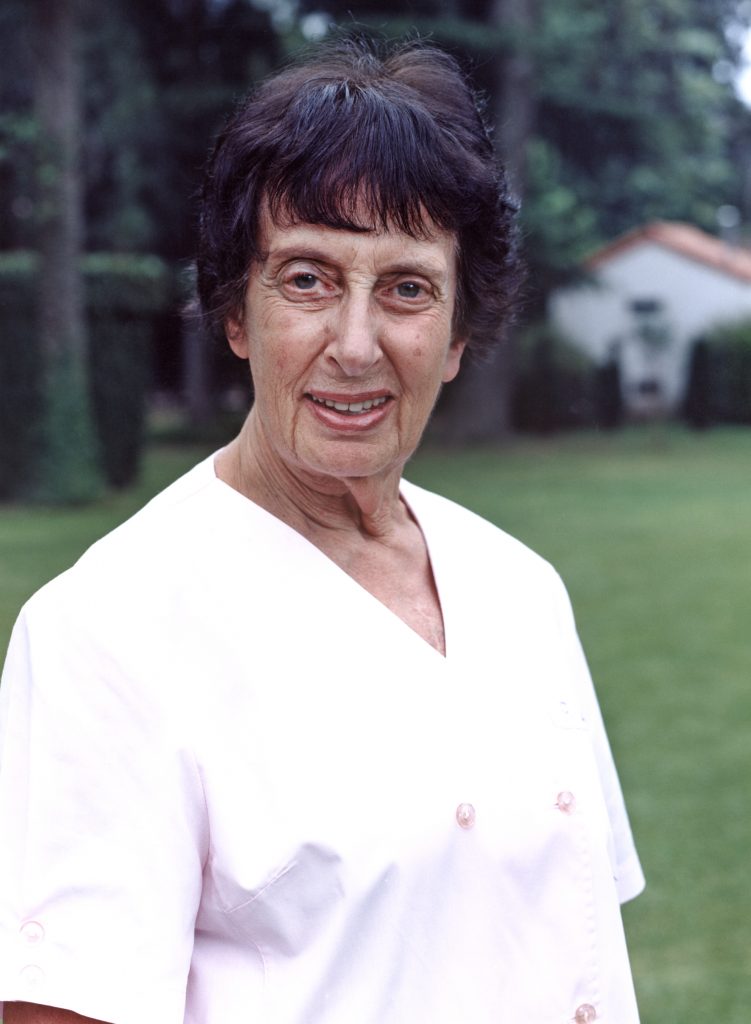 Her parents never spoke to her or her sister about their plans of emigrating, she says. “Us kids had no idea.” And when she says this, then the child within her emerges. Ruth Goldschmidt has a very quiet and soft voice. Today, she understands everything very well.

He should bring his family as soon as possible to safety

Neé Ruth Fleischmann, she was born on 28th July 1928. Her father was trading in Mosel wines in North and South America. His customers and friends beseech him to bring his family as soon as possible to safety. She says that must have been in February or March 1933. “My father came back from a trip to Holland and told my mother on the phone to take two suitcases and travel to Holland with my sister and me and to be careful not to draw attention.” It was supposed to look as though we were going on holiday. Ruth Fleischmann, whose married name is Goldschmidt, remembers clearly that her aunt, her mother and her grandmother were very upset. “But my mother did what my father asked of her, although at the time she certainly couldn’t understand it.”

From then on, Ruth and her elder sister and mother spend six years in Scheveningen. Her Granny and her aunt remain in Hamburg. Ruth’s father spends a lot of time away with work. When he comes to Holland, he is like a guest. For the children he is like a stranger. At some stage, the mother explains that they would emigrate in order to live together as a family once more. The Fleischmann family can choose freely between Argentine or North America. But because the father was in Argentina initially on business from 1914 to 1918 and then lived there during WW1 and took the Argentine nationality, Ruth’s parents’ decision falls on Buenos Aires.

In the meantime, the granny had also arrived in Holland, “at a time where it was getting harder for Jews, in that they didn’t have enough to eat and many things were forbidden; this must have been 1935 or 1936.” When the granny refuses to move to Argentina in her old age, Ruth faces a painful fare-well. She recounts how her father was argueing with the Granny because he was determined to take her with them. “He could easily do this, financially as well as otherwise.” But she decides against it.

When the Fleischmann family emigrates in October 1938, she moves to a retirement home. “And then we had to say goodbye to Granny.” Ruth Goldschmidt makes a long pause. She can’t carry on talking. Tears rise in her eyes. She swallows, „even today, when I think of that moment, it is still terrible. Even a number of generations along.” She thinks and regains her composure. She talks about the anxiety about the war, which was already palpable in 1938. She continues how she, together with mother and sister, travel to England in the first instance, to stay in the private lodgings of a family for ten days while they were waiting to continue on their journey. Ruth and her sister enjoy the company of that family’s children and they have a lot of fun together.

Except for the painful leave taking of her Grandmother, she didn’t experience any foreboding at this time, she says today, nearly 70 years later. “Thanks to my father’s foresight and care, my sister and I have never suffered from persecution.” In Argentina, too, they are being treated well.

“Everybody, all of them perished.”

While Ruth and her family are slowly getting settled in Buenos Aires, he aunt is still in Hamburg. “She really lived through troubled times,” says her niece. But she only knows this through hear-say. Her aunt works as a pianist and piano teacher. After her boss, who values her, has to dismiss her to prevent the music academy from getting shut down, Ruth’s aunt goes on to work in a Jewish orphanage. Amongst other things, she is involved in helping to gradually send children to England on the Kindertransport. However, she always returns to Hamburg. At the outbreak of an epidemic of scarlet fever she becomes infected and has to be quarantined in a public hospital. During this time, Ruth’s mother has no word from her for many weeks. When war breaks out, Ruth’s Granny is evacuated and from then on lives with relatives. “Thankfully she passed away just shortly before the Germans invaded Holland.” All other relatives lose their lives in Theresienstadt and other concentration camps. Ruth Goldstein remembers: “It was terrible, when after the war news reached Argentina of how many - ,” she falters, swallows, “Everybody, all of them perished.” Only her beloved aunt, “thankfully made it to London and survived the war.”

She misses her Granny

Ruth is ten years old when she arrives in Buenos Aires. She misses her Granny and is homesick for her Dutch friends. At the beginning, she had a hard time at Pestalozzi school, because she learnt to read and write in Dutch, not in German. “I never learnt German properly until I came to Argentina.” She also has lessons in Spanish, English and French. “But I had no problems,” she says and laughs. At least with regard to school. From a personal perspective, it took her a good while until she felt settled.

She long since likes to live in her new home. “I respect Argentine traditions, nature and history.” However, she says that since the beginning of the military dictatorship things have changed for the worse. But she led a comparatively good life. She got married and had three children. By now she is great-grandmother of two. Even though her friends are mainly German-Jewish, she says, „yes, I feel at home here.“

Although she had to re-learn German as a child and no longer feels German inside, her parents’ language takes on a special meaning for her. Ruth Goldschmidt becomes a German teacher and works passionately in her job until the school closes. Suddenly she feels a great emptiness in her life which she wants to fill and she remembers San Miguel. Her parents died there, in Hogar Adolfo Hirsch. For a long time she shunned the place out of grief. But for the last five years she’s been working there as a voluntaria. Every week she’s looking forward to her commute. “For me, the Wednesday is a very good day and when I return home in the evening, I feel fulfilled and satisfied.”

She can imagine living there herself one day, but she’s got a lot of plans until then. For example, she wants to travel. Although when she and her husband were invited for the first time by the Hamburg Senate to visit the town of her birth, she is not keen and only agrees to come along to please her husband. But once she’s there, she has a wonderful time. “I only met very few people in my life who were so good and interesting.” The trip also evokes a lot of very early memories, the part of her life, which she thought had become lost. “And indeed,” she says and laughs, “when we were leaving, I cried, because I would have liked to have stayed longer.”