She's got red cheeks. because she is delighted and because she has just put on her make-up. Elfi Steinitz is not a child of sadness. Love plays an important role in her life to this day. There should be no room for it here in the old people's home, some find. The 90 year old doesn't care. Gordon Krauß neither. When he proposed to her, she probably asked herself, "Why not?“ She says, "For me, it means, I have someone for whom to live, for whom to care." Gordon Krauß nods, "Yes." "To love someone," she adds, and the man at her side says, "This is very important!“ Elfi Steinitz sits very upright and laughs over her whole little face. Gordon Krauß also smiles and holds her hand. Both look very content. 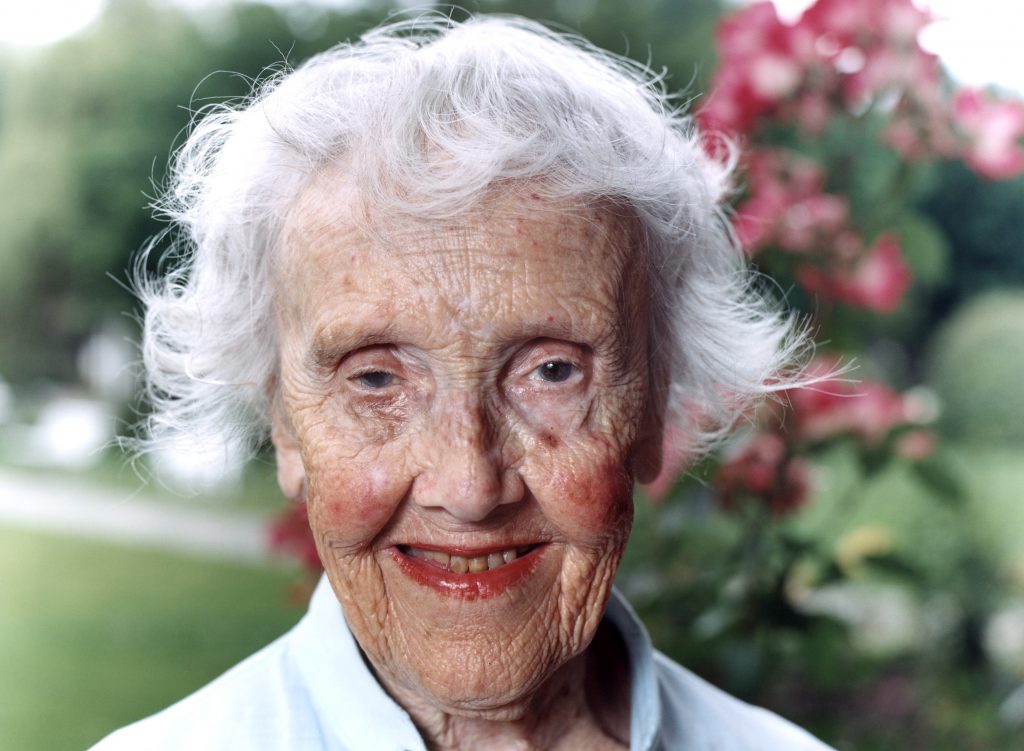 "I'm Austrian according to the passport, but otherwise I'm uprooted. They threw me out!"

Besides all this happiness, the little old lady also has a lot of Bronk in her. That's the Austrian word for anger, she says very definitely. Her anger is directed against Austria, which she once loved very much. "All people always say that Vienna is so beautiful. I know', she says and adds that in spite of it she has never had any longing. "I'm Austrian according to the passport, but otherwise I'm uprooted. They threw me out!" Despite everything, the Viennese did not allow her life be ruined. Her cheerfulness has remained with her.
She was born on 4 June 1915. Vienna has 23 years to shape her. She grew up in an enlightened environment. After her parents divorced, she lived first with her grandmother, then with her mother and her stepfather. In Vienna she attended elementary school, the grammar school, and later she graduated from high school with a technical baccalaureate. She never senses anti-Semitism, which however is latent in Austria in the 1930s.

Of course she felt threatened at the time

With the Anschluss (annexation) of Austria to the German Reich in 1938, everything changed. She experiences the changes first-hand when two boys do not come to her garden party after passing their school-leaving examination because she is Jewish. Some of her professors also turn out to be Nazis. "They suddenly showed their true faces“. Elfi Steinitz vividly remembers the enthusiasm with which the Austrians received the Nazis. "The current claim that they were horrified is a full lie." This is what annoys her the most. Of course she felt threatened at the time, and it was immediately clear to her and her parents that they had to leave Vienna. Shortly after the country's annexation to Nazi Germany, they took the train to Budapest. Elfi Steinitz, then called Elfi Lotte Graf, will never return.

"That was a very bad time."

The stepfather, a scientist, works from now on in the other Danube city. The family is doing well until the Hungarians expel them from the country. "My parents went to England, where my stepfather was let in because he was a scientist. And I stayed in Hungary alone for personal reasons. I had fallen in love." She says that this love was a great disappointment. "That was a very bad time." She doesn't want to go into details. But she tells me that soon after her parents left for England, she also had to leave the country. A lawyer offers her help and takes her to a Hungarian health resort where she can stay for 14 days. „That was 1939“. Shortly afterwards an uncle takes her to Yugoslavia, where she lives as a Slovenian, protected by a fictitious marriage with one of his friends. "My name was Proschenak." She took language lessons to help her not to be recognized as a Viennese Jew. She then learned the language quite well, she says. But when the Croatian nationalists give up their resistance against the Nazis and collaborate, her pretended husband is scared and asks for divorce. Of course her uncle and they themselves could understand this, she says and smiles. Being married to a Jewish woman was very dangerous for him after all.

Shortly afterwards she comes across an acquaintance, a student she had once given English lessons to. "That was Herr Steinitz." They fall in love and live for three years together with Elfis's uncle and his Christian wife, hidden by farmers. "We lived on a straw mattress in the parlour in the farmhouse." They live between the fronts. Yugoslavia is occupied by the Germans and the Italians, and at the same time there is a civil war between the nationalists and the communists. "It was quite complicated," she says, and tells that they always trembled for fear that someone might betray them. "And someone did betray us indeed," she says. She had just gone to fetch water at the well when several nationalists arrest her and take her to a camp. Because she can't walk in her wooden slippers, she walks barefoot. 15 kilometres. In the camp they are accused of collaborating with the Communists, of washing laundry for their opponents. "Well, I've already had enough to do with my laundry," she says laughing today. But she didn't feel like laughing at the time. "The matter was quite serious."
But in the main camp they are shown to a colonel who, when the nationalists had fought against the German occupiers, had sought refuge in their room for one night. "That was Colonel Jovanovic. He recognized us immediately." That was their luck. He tries to convince Elfi and her husband to collaborate, but they remain steadfast.

One day Elfi's husband is asked to spy on his colleagues

Later it turns out that this was a good decision, because among the communists Elfi's husband gets "a very good position", as she says, "with very good rations and so on". Elfi also works. She teaches English to journalists. They stay in Yugoslavia until Israel is founded. In the meantime they have long since got married. One day Elfi's husband is asked to spy on his colleagues. "He came home and said, „Listen, we’re leaving." And so we went to Israel."
But her brother-in-law, who has been living in Argentina since 1929, wants to have his brother with him, because the rest of the family was killed by the Nazis. Elfi's parents now live in Sweden, and her mother has a heart condition. One day she receives a letter describing the mother's situation as being more serious than before. So the daughter decides to go to Sweden "and my husband should dissolve everything in Israel so that we could leave for Argentina". But the Argentine envoy in Israel does not want to give them visas. "He always comforted us." In Italy, her husband gets Paraguayan visas. There Elfi meets her husband and a short time later they travel from Genoa to South America. In Buenos Aires they simply get off the ship "and my brother-in-law and his partner welcomed us and then we stayed here". That was in 1951.

"We felt very good from the very first moment. Nice people. Like Italy."

Elfi Steinitz agrees with her new husband Gordon Krauß that Argentina was a good country for immigrants at that time. "We felt very good from the very first moment. Nice people. Like Italy". She travelled a lot as a child, and that's why foreign places never were strange to her. Since her former husband was Yugoslavian, according to the Viennese, she had mainly dealt with Yugoslavian Jews. But many old friends and also her first husband died long ago. She had no contact at all with the Jewish Philanthropic Society.
When asked why she still went to San Miguel, she said, "Because I don't have anybody in the world anymore!“ She never had any children. Elfi holds Gordon's hand in hers. Here in San Miguel, she found a second happiness in her late years. A year ago they got married in the old people's home in the synagogue. Now they walk in the park together almost every day, they eat together, read to each other or act theatre together.