Ilse Weinstein is very hard of hearing and during the interview has to ask again and again whether she understood correctly. Her hearing loss is a big problem for her for many years. That's why the petite 92-year-old woman doesn't like to leave her room too often in Hogar Adolfo Hirsch. Room 110, red hallway. Each hallway has a different colour, as an orientation aid. 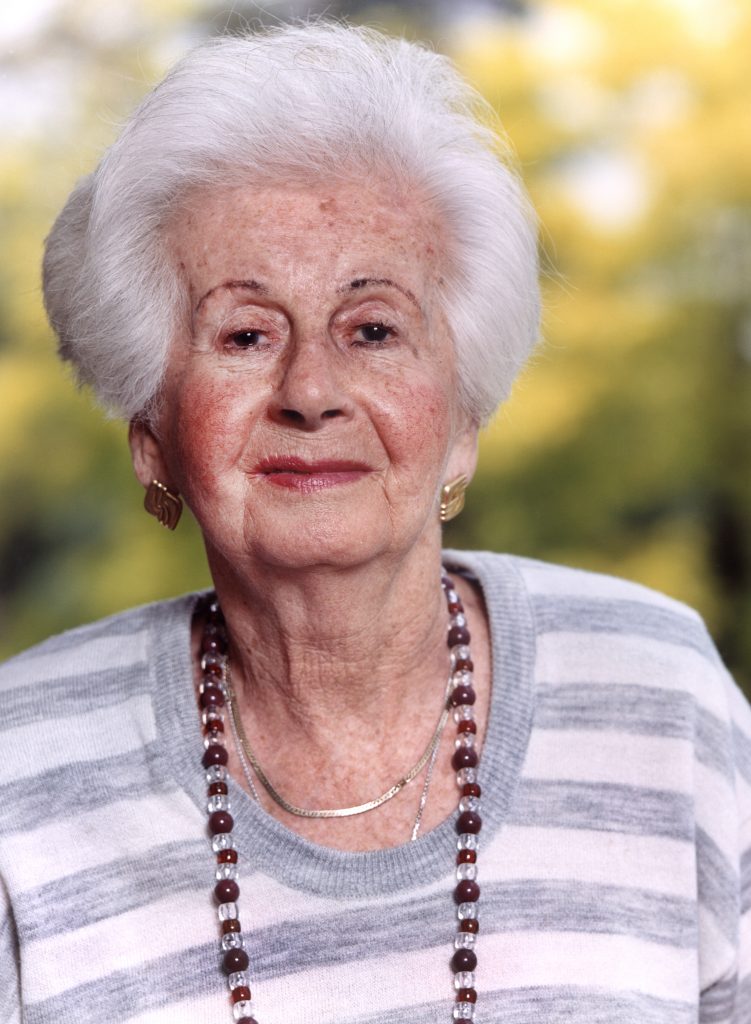 She reveals only the essential facts about herself and her story

Ilse Weinstein likes to chat, but "when I am alone, I am alone. I am very much alone," she says and is a little sad about it. Not too much, because she has long since come to terms with her hearing loss. She talks as often as she can. "As far as I can chat" because, she continues, "people have no patience." Now it almost seems as if she has unlearnt to tell her story. She reveals only the essential facts about herself and her story.

Born in Papenburg "near the Dutch border" on 27 October 1913, she grew up as Ilse Mindus with an older sister and a younger brother. Although she was Jewish, she attended a girl’s secondary Catholic school and was taught by nuns. She doesn’t tell much more about this time in Germany before the National Socialists ruled the country. "I left at the age of 23," she says. Then she says that nothing negative happened to her personally in Nazi Germany, that she didn't go through much. "But my parents," she says and tells me that her father was interned for a day, and that he was quickly released again because the policeman happened to be friends with his parents and she went to school with his daughters at the nuns’. She was already in Argentina at that time, she says. She arrived there in March 1937. An acquaintance from Buenos Aires, an American, had sent her fiancé an employment contract. That’s why he was given a llamada. But when this American gentleman tells him that he should come without his fiancée, he says, "That is out of the question. Later it will be too late." And it might actually have been too late. Ilse goes with her future husband from Papenburg to Frankfurt am Main, where they say yes to each other quickly and without solemnity. From there "we went to Genoa the next day." From there they take the ship named Augustus to Argentina. They didn't have any difficulties, she says.

She sinks into her thoughts. Her eyes fill with tears. She cannot cry

Once arrived in Buenos Aires, Ilse immediately arranges everything to send the necessary papers to Germany. "Thank God we got my family out. First my sister with her husband. He was Dutch. And afterwards my parents with my brother, in the middle of November. Shortly after Kristallnacht. No," she has to think, "they came in early 1939." So they experienced the pogroms. And she? Is it possible that she herself did not experience anything negative? It is difficult for her to remember. She hasn't spoken to anyone about this time in Germany for a long time. But then she remembers. There was something. She tells how her fiancé fled from the Nazis „several times". Mostly to Lörrach to the Swiss border. "He no longer felt safe. He was afraid, but he kept coming back." That's all she says. She is only happy, and she always stresses this again and again, that she was able to save all her close relatives. "But all aunts and uncles and all cousins died. A family with six children. The other with three children. All of them, unfortunately. That was terrible! She sinks into her thoughts. Her eyes fill with tears. She cannot cry. Then she looks up and asks, "You certainly know the history. Do they still talk about it in Germany Germany?" She thinks it's good that people talk about it in Germany. Nevertheless, she remains sceptical about the country of her ancestors and asks, although she suspects the answer, "But there is a lot of anti-Semitism again, no?
When anti-Semitism became worse and worse in Germany in the 1930s, the young Ilse worked for her uncle in Felsberg near Kassel in the oficina, as she says, in the tobacco and spirits wholesale trade. Here she lives relatively undisturbed. She visits a Jewish youth group, listens to lectures, plays table tennis, goes for a walk. Here she gets to know her future husband. As a good sportswoman she is also a member of the German Gymnastics Club. "I was good at gymnastics. And one day they wrote us a letter, they didn't tell us directly that we should leave, but that it would be better if we withdrew.“ That was in 1935 or 1936, perhaps earlier. She doesn't know that exactly anymore. That must have been bad for the young woman back then, but today she finds it particularly depressing that the uncle she worked for also perished. But how bad the fate of the family members that were left back after their departure was, that she only finds out after the war.

She has no longer got anything to do with Germany

The young couple Weinstein settle in Argentina. In the beginning Ilse lives with her husband in a room of a guesthouse, then in a small departamento and later in a bigger one. things go on well. Ilse Weinstein doesn’t have children. Unfortunately, as she says. Since her husband died a long time ago, she lives alone. Since a few years she lives here in the home, where she feels fine. She has no longer got anything to do with Germany, except that she receives a small pension because she worked in her uncle's office for a few years. Germany is far away. But in her mind she is there more often than she would like. Although she didn’t have to suffer much under the Nazis, as she emphasizes again and again, she has to think a lot about that time. Especially because she is so much alone. She has a lot of time to think.