Ilse Henriette Lina Jordan, born in Berlin on September 09, 1929, lives through an aventura, a real adventure, when she leaves Hamburg alone with her mother in April 1937. From now on they want to live with their father in Argentina. The father had arrived a year earlier to organize the departure of the small family. The crossing with the French ship is great fun for the seven-year-old girl. There are many other Jewish children on board with whom she can play. They celebrate Pessach together, and there is also an Equator festival, where she dances with a French boy whom she had befriended. For Ilse there is no reason to be sad. 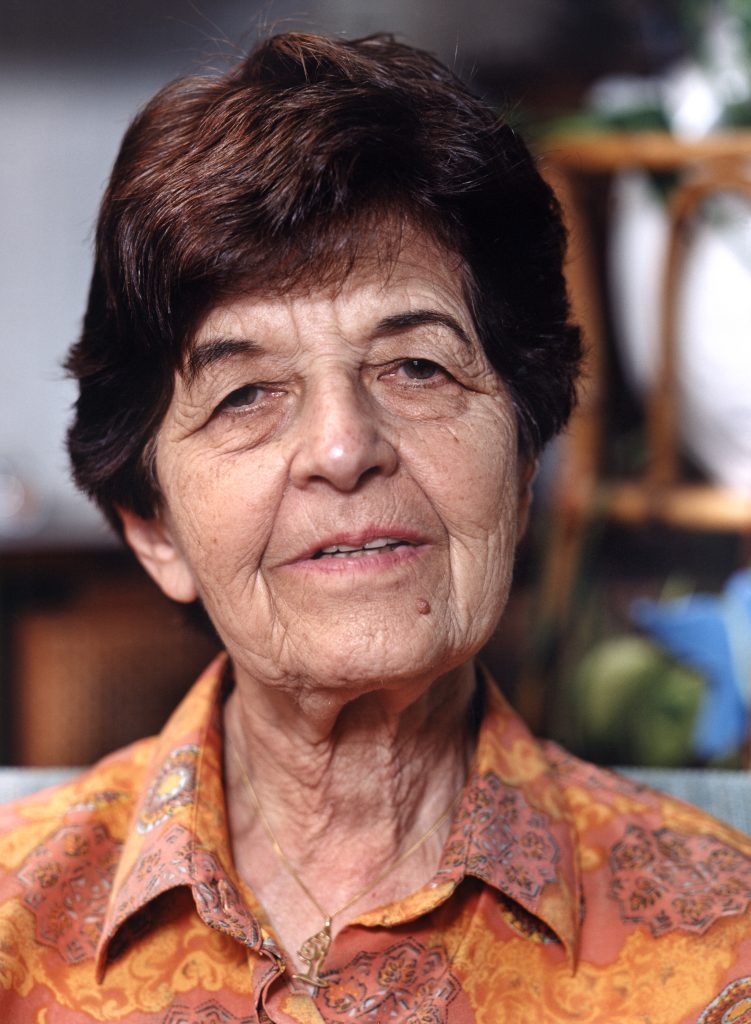 Today, almost 70 years later, she sits in her living room in her apartment in Belgrano and guesses that the emigration from Germany must have been terrible for her parents. At the time she had no idea. Sometimes memories come up that she only understands since she is a grown-up.

„And then the Nazis came in and hit him.“

In the meantime, Ilse Smilg understands why her mother contracted shingles, a week before her father traveled in advance to Argentina and she and her mother had to travel to Upper Silesia to see her grandparents. For the first time little Ilse noticed that things had changed in her life when strangers came into the beautiful large apartment in Berlin-Charlottenburg and the housemaid said to her, "They're coming to look at the apartment“. Ilse Smilg tells us how she was already outraged back then, "Who wants to go into our beautiful apartment? and she couldn't understand the answer. She couldn’t understand because her parents never talked to her about the circumstances and their plans. They probably thought that the change would’t burden the child. Ilse Smilg remembers the sale the parents made. "Outside there was a long line of people who were there to buy our things. And the police was there, too. I remember that," she says and thinks for a long time, but she can't recollect much more. She believes that the boycott of Jewish businesses was the reason for emigration. „I think it was in 1933, bur I’m not quite sure. It was on a day in which all Jewish shops hat to close. My father didn’t close his shop and then the Nazis came in and hit him.“ She found out this much later, as a grown-up.

Did he fall victim to euthanasia?

She continues to recount and hesitates, there was an uncle in Neiße who wasn’t quite ok in his mind. "It wasn’t discussed openly. When we were in Neiße, he visited us sometimes over the weekend. I was too young to notice much. I think he was in a sanatorium. According to what I know, it happened because the Nazis had beaten him. If there was anything before then, I don't know." Ilse Smilg thinks for a long time and then says how difficult it was for the grandparents to follow them to Argentina, because this uncle would not get an entry permit from any country. Argentina did not want to admit him either. When the grandparents made up their minds, it was almost impossible for them to obtain visas. "But after my father went to the ministry every other day for two years, he at long last did get the llamada and my grandparents could leave“. One uncle flees via Cuba to the U.S.A. and "the other uncle perishes," she says. Until now she does not know anything for sure. Did he fall victim to euthanasia? She would like to know. But even after 1945 this had wasn’t discussed - at least not in her presence. A sad chapter of family history.

„Her mother didn't allow her to sit next to a Jewish girl.“

Less dramatic, but still formative for little Ilse, are her own encounters with anti-Semitism. In her Berlin school, for example, she sees herself sitting on the stairs in front of the class and waiting while the others have religious instruction. „In a way it was to 'feel different' somehow“. Later in Neisse she goes to the state school and several other Jewish children go with her. "And one day the girl who was sitting next to me said that her mother didn't allow her to sit next to a Jewish girl. These are her sole negative recollections, she says and smiles quite subdued. Ilse Smilg is a particularly calm and serious woman. Her eyes sometimes appear sad and thoughtful.

For the modern Berliner family this is completely inconceivable

When Ilse disembarks with her mother in Buenos Aires in April 1937, what is more important than anything else for her is to see her father again. Until then she has no idea of her future. "In Argentina, however, I immediately understood the situation. I arrived and couldn't speak a word of Spanish." The very next day their parents enroll her at the Pestalozzi School. After her mother takes her to school on the first day, she is supposed to go to school on her own with a note hanging around her neck showing her address. "My parents were shaped in a very European way, and I always went alone everywhere." That was normal for them. Less normal were the living conditions in the casa chorizo, where the three of them had to share two rooms, a patio and a terrace. "This was more like a terrace with an apartment rather than an apartment with a terrace" she says and laughs. There is no hot water in this typical Argentine townhouse. For the modern Berliner family this is completely inconceivable. "My father had rented this apartment when we were still in Germany, and he hadn't even thought that there would be an apartment without hot water. So my mother had to warm the water on the fire."

Ilse plays with the other children in the house without being able to communicate. "When they asked me something or said something to me, I always just said "si". When they looked puzzled, I said "no". And when they looked puzzled again, I said "sisi"," Ilse Smilg says, and she laughs again.
In her first year at the Pestalozzi school, she hardly learns Spanish. "Most of the children spoke German to each other and we only had one hour of Spanish per day.“ Because the Pestalozzi school is too expensive for the Jordan family in the long run, Ilse changes to a state school. From then on she speaks more and more Spanish. "My parents also tried to speak Spanish with me.“ She continues to speak German with her grandparents.

Now the five of them have to live in two rooms

"From my point of view today, emigration has set my parents back a lot," she says and becomes more thoughtful again. Their parents had never been rich, "but they were always well off. They could go holidaying. They could afford to go to the theatre." The grandparents, who had a "big shop" in Neiße, had to leave everything behind. "They only had three suitcases. And now they even had to be fed." Now the five of them have to live in two rooms. Ilse sleeps in her parents' room. "It was very cramped," she says, "When I think about it today, I notice how hard it was for them. I didn't notice much of it then." Little Ilse thinks it's normal for her parents to financially tight, "because all the immigrants in our neighbourhood were more or less in the same situation“.

She is a chica del lunes, a Monday girl

Socializing with the other Jewish immigrants is still very important to her today. Even as a child she travelled to the Jewish colony of Avigdor in Entre Ríos to spend the holidays with another Jewish family. So she gets in touch with the Jewish Colonization Association early. Of course, she also has contact with the Philanthropic Society, because her later husband, José Smilg, was a member of the board (comisión) of the Society for many years. Since she retired as a chemist in 1994, she is a chica del lunes, a Monday girl. "Me agarró' fuerte," she says and becomes quite cheerful. "How do you say it in German? It carried me away." She won friends there, and that alone made San Miguel very dear to her heart. "When we travel, I always say to my husband, let's go Wednesday so I can still go out on Monday."

They often travel to Israel because one of their two daughters live there with her family. They also travelled to Germany, even if they didn't think that was possible in the 60s. "Our first trip together was in 1963, when we said, "No, not to Germany." Bueno, later on we were in Germany often, but to live there ...? No! When they are travellimg somewhere in the world, she feels like an Argentine, but in Argentina? She thinks for a moment. Then she says, "In Argentina - let's say I'm very grateful to the country for what it has done for us, but I don't think I'm Argentine in my way of thinking". She has no Argentine friends. "Our good friends are practically all German Jews." Therefore the topic of emigration is always present. But she can think about it as much and talk about it as much as she wants. She will never know how the emigration really felt like for her parents at that time.