„Either we all go to Argentina or we all stay here.“ This is what Irma Eiser’s father says to his daughter in 1938, because the informed young woman, who is an enthusiastic Zionist, would actually prefer to emigrate to Palestine. But she couldn’t contemplate that her whole family, her father, her step-mother and her two younger siblings would have to stay behind in Germany on account of her actions. “I couldn’t bring this misfortune upon my whole family.” Therefore, they all together emigrate to Argentina. She has now lived in the country for 67 years, which used to be so foreign and far away from all she knew. 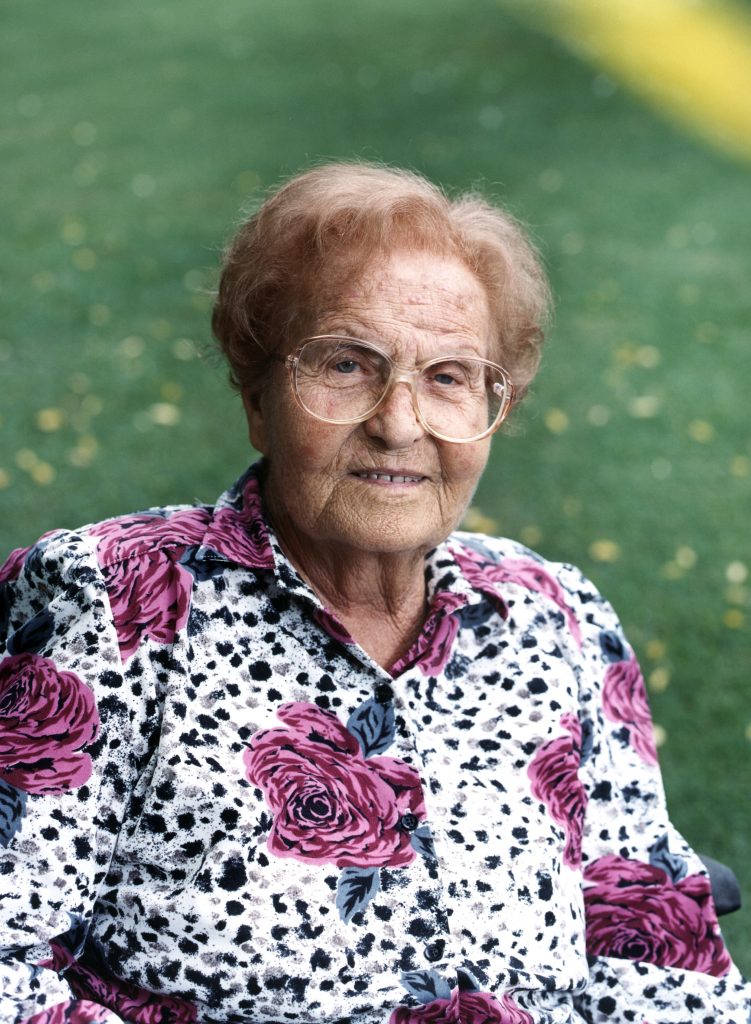 Irma was born as the first child on 5th July 1917, in the little town of Harff, near Cologne. Her mother died giving birth to her brother. Initially, her father has to care for his children on his own. Until he marries his second wife. Irma still speaks very warmly of her second mother. Even when at age 13, Irma moves to her aunt in Holland as there she will be able to travel to school by bike, contact to her stepmother remains very close. More than 75 years later, the old lady sits on her chair and lets her shoulders drop slightly. Her eyes look tired. At the same time, a brief smile lights up her face. “She was always sending me things and knitting. Oh, she was a good second mother.”

„I was as Zionist with heart and soul.”

At the school for Industry and Home Economics in Soest in Holland she learns a host of useful things. “How to repair a telephone. We learnt everything there.“ But before she can complete the course, her step-mother makes the suggestion to go to Argentina. Early on, the Eiser family realises that they cannot stay in Germany. People boycott her mother’s shop and she can’t see a future in the country. Irma is conflicted. “I already organised all the paperwork for Palestine, had already learnt Hebrew, or Ivrit. I was as Zionist with heart and soul.” But her decision falls for her family, for Buenos Aires. The Head of the Jewish Colonization Association (JCA) is a good friend of Irma’s Berlin uncle. The 92 year old remembers today: “Through him I received my llamada. It came through in eight days”. The family has all their paperwork ready. It takes a further three weeks until they have the tickets for their voyage. The family travels via Hamburg to Brussels, where they meet up with Irma. “I went up onto the ship, collected my sister and we went for a stroll. That was in February 1938.” She buys a supply of cigarettes. „I was a heavy smoker.“

During the course of the journey, it transpires that this was a wise decision, as they are on board for a duration of five weeks and “we weren’t allowed off the ship. Nowhere.” On board the ship, she and her sister get to know a fat lady who speaks Yiddish. “She wanted to take my sister and me with her – it drove my mum crazy!” There was a fear amongst emigrants that human traffickers were targeting girls. Irma remembers how her mother says, “Absolutely not, who knows what she’s planning to do to you.” People told them that many Jewish girls, who travelled to Argentina by themselves, had gone missing. This also explains why the authorities refuse to let Irma off the boat in Buenos Aires, as she is suspicious on the grounds of being unmarried. “I was on my own for two days. Without my parents, without any of the relatives that were on the ship.“ The President of the JCA, a Mr Rubin, has to come and vouch for her.
It wasn’t difficult for her to leave Germany behind, she said. “I no longer had any connections to Germany.” Her father was mourning, she wasn’t.
For her, the whole thing was a big adventure. The JCA sent the family to a lodging house. “It was called Ohrwaschl” She says and has to laugh. “That really tells you everything!” The lodging house is crawling with vermin insects. “Fleas, bed bugs, all sorts.” The mother has had her gold watch stolen. „Oh dear, yes, we witnessed an awful lot.“ For the young woman, this isn’t reason to despair. Irma is firmly determined that get a grip onto life in their new home.

There, too, their life is initially very primitive

When she walks with her mother along the Calle Corrientes one day and they stop at a bakery, they see a cheese cake,” it broke our heart.” Her mother would like to try a piece and worries whether she will be able to make herself understood. She speaks no Spanish. Irma runs home and fetches 1000 Words in Spanish. When she uses the help of the book and laboriously gets out her request, the lady behind the counter says, „Why don’t you speak German? I understand German.” The city is full of German immigrants. There are also a lot of Jews in Entre Ríos, the village communities of the JCA. That’s where Irma and her family are headed eight days after their arrival in Argentina. There, too, their life is initially very primitive. “They also had so many bedbugs there, so many bed bugs!” she exclaims and is still disgusted today. “Oh! Appalling!! The JCA provide them with a house, but apart from that they have nothing. “Nothing! Couches. My mother bought two couches back in Hamburg. We slept on it three people side-by-side. It was miserable. Miserable!” And still, everybody was relieved that we were somewhere else, that they were not in Germany, because a future in Germany would have looked bleak.“ The JCA give her ten horses and ten cows. “On loan, everything on loan.” She learns how to milk, she learns how to ride. And she meets a young man whom she likes very much. Heinrich Stern was his name. „I ended up marrying him“ and joyfully remembers the large wedding and the 15 cakes which they baked, all of them at the same time, in the large stone oven. That was in 1939, “a new beginning” she says. “All the same, it was a good time.”

She receives help and solace through the Jewish community

It is not until 19 years later that Irma and her husband and her son Manuel Juan move to Buenos Aires. They send him to a prestigious Technical College, “to get him out of the environment,“ she says. They buy a house in Ramos Mejía in a suburb of Buenos Aires. Her husband buys a van and starts selling sausages and meat. Business is going well and he is popular with his customers. But one day everything changes. “My son and my husband got involved in an accident in the house, in the garage.” The house burns down and “my two men ended up in hospital.” Her husband dies as a consequence of his injuries and her son has to stay in intensive care for a year. This is a bad shock and a difficult time for Irma Stern. She receives help and solace through the Jewish community. She attends Temple and over the course of the years forges many strong friendships with fellow German Jews. She marries a second time. Her second husband, Ludwig Frank, is also a Jewish German. She has little contact with Argentinians, even though to this day she has a high opinion of them.

Enthusiastically she talks about the cordial nature of the Argentine people

Although going to Argentine scuppered her initial plans, she is happy and glad to this day that she didn’t end up going to Palestine. She took to her new home right from the beginning. Enthusiastically she talks about the cordial nature of the Argentine people. “Germans are less jovial than Argentinians,” she says. She was always treated well. She was given a new home and for that she is grateful. In spite of all that, she, like most of her generation, has remained German. The home for German-speaking Jews, Hogar Adolfo Hirsch, has been a home to her for the past nine years. Here is where many of her acquaintances from earlier days live. Here she has a room which contains her furniture. Here she is being looked after. She doesn’t have to cook, doesn’t need to do her own laundry, and when she gets ill, then there’s a small doctor’s ward in the same house. “I feel safe here” she says and smiles across her whole face. Here, the circle of her life draws to a close.
“Last week there was a pianist here”, she says. “We didn’t want it to end. He played so beautifully. Things we all recognised.“ Those are the good memories of Germany. The folk songs. She sang along, she says and grins and adds softly, “but only in my head.”