“German?” she asks and thinks briefly. “I’m not at all German. I’m Argentinian.” There’s defiance in her voice. But she also laughs, and is looking happy. Then she says, “I speak German.” As she’s weighing up the question of her national identity, her friend Edith Braun butts in. Rut Marx is also listening in. All three have long since been friends and are voluntarias in Hogar Adolfo Hirsch. Edith Braun says, “but by our nature we aren’t Argentinian. In that sense we’re still German.” Lore Brieger agrees and adds, “Look, as such, Germany didn’t give me anything, but when I hear German music, not only the classics, but also German folk music or operettas, I find that very touching, very odd. That stirs something in me.” And yet, German music had only little time to leave its mark, because by the time she has to leave the country, she is only just 13 years old. 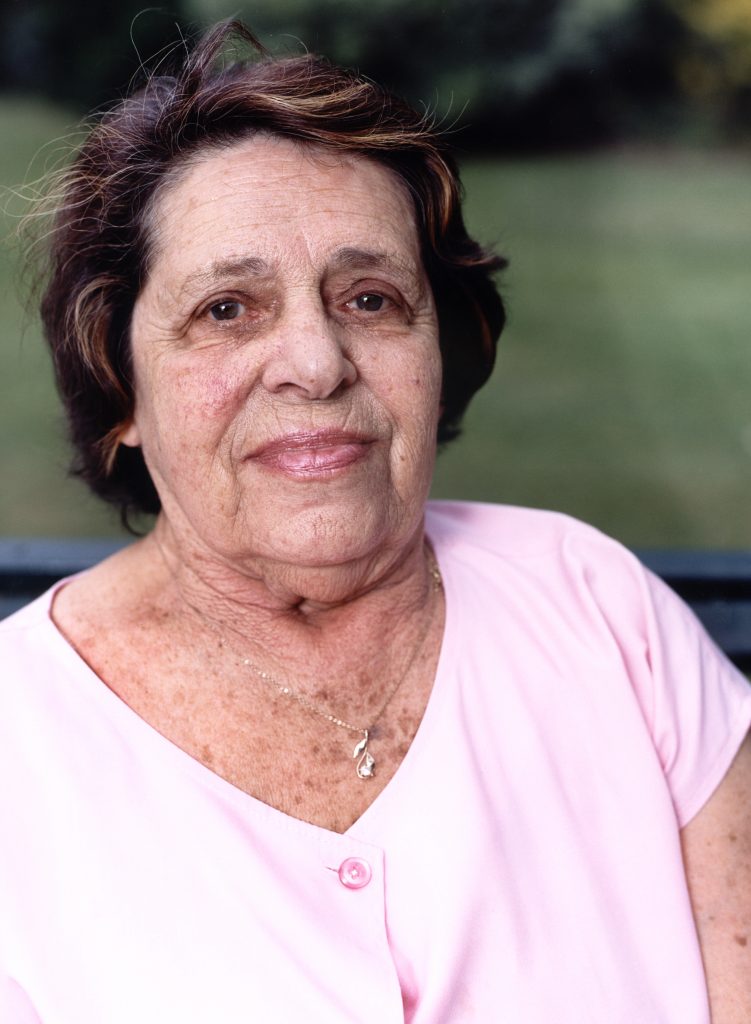 Then called Lore Salmons, she is born on 13th November 1927 in Neersen in the Lower Rhine region. At five years of age she has to overcome the death of her mother. Nearly at the same time, the Nationalsocialists come to power. Lore is still too young to understand what that will come to mean for her life. Three years later her father marries a second time and 1937 a little sister arrives for Lore. A short while later she has to leave her primary school because she’s Jewish. From then onwards she attends a Jewish integrated school in München Gladbach. Lore Brieger says she cannot remember reprisals and anti Semitism.

A time of uncertainty now lies ahead of Lore

Although what is normality for her who is only a child, urges her parents to action, because her father, a livestock trader, doesn’t see a future in Germany. In 1938, with the help of the Jewish Colonization Association, he emigrates to Argentina. A time of uncertainty now lies ahead of his older daughter Lore. After spending two months on her own, living with her aunt, she follows her mother and sister to stay with her grandparents in Eisleben. “My grandfather was a teacher and cantor for the little Jewish community”, she says and recounts how she and her little sister return from a walk on the 9th of November and sees “a huge crowd of people on the street”. She had thought it was Luther’s birthday, she says. But then she realises that the Nazi hordes have smashed up the synagogue which is just above the grandparents’ flat. She witnesses how the men return to also ransack the grandparents’ flat. She remembers that she and her sister were crying and that the mother asks the looters to allow her and the girls to leave the house. One of the men had a heart, she thinks, because “he said, ‘Stay here. We won’t hurt you.’ It’s really true,” she says. Her grandparents’ house was the only Jewish house in Eisleben that was spared. But that is only a small consolation. Lore’s grandfather is deported to Buchenwald. A short while later he is dismissed from the camp. Lore Brieger pauses. Then she says, “My grandparents did not emigrate, although they had visas for Colombia, because they didn’t want to leave their daughter and her two children, my sister and me, behind by themselves.” That cost them their lives. A heavy burden to bear for her granddaughter. But she doesn’t talk about her feelings. Instead she talks about how difficult it was for her, her mother and sister to get out of Germany, because time was getting very short.

„It was a real tragedy.”

The necessary papers don’t arrive and Germany has already declared war against Poland. Time passes and potential escape routes via Italy, Russia or Shanghai fall through. But eventually word is that they “can travel on the last ship out of Lisbon”. They travel with minimal luggage to the capital. Lore remembers how she proudly shows her mother the miniscule pendant that she wants to take with her to the foreign land called the Argentine. Seeing that, says Lore Brieger, her mother “blanches” and throws the pendant into the Spree river. Lore understands immediately. If the Nazis had spotted the pendant, it would have been fatal for them. But only a few days later they succeed in where they thought they would fail. They fly by plane from Berlin to Barcelona. “That was very unusual,” she realises. That same night they continue on to Madrid and from there to Lisbon. She remembers that a porter in Lisbon lost her sister’s doll. “Bueno, now we’re laughing, but it was a real tragedy.” But Lore is the big girl. She has to be brave. The voyage on the ship is everything but comfortable. They travel steerage, in the ship’s hold, but Lore doesn’t complain. Anything is better than to have to stay in Europe. And Lore is full of joy and happiness because after three years’ separation, she shall see her beloved father again. But she is also sad “that we left the grandparents, because we didn’t know - and I knew this, too - whether we would see them again.”

Everything is new and different

Everything Lore encounters is foreign to her. “I knew we would be sent to a camp, but that didn’t mean anything to me.” When they arrive in Buenos Aires, it’s Christmas time, but it’s baking hot. Everything is new and different. It’s different again in the countryside, in Entre Rios. “There was nothing there” she remembers. “Nothing, nothing, nothing.” They sleep on mattresses made of fur and laundered flour sacks. Everything was unfamiliar and primitive, “but we saved our lives.” And Lore is happy to be reunited with her father. “The only thing I found terribly oppressive was that I didn’t have any friends.” She is 13 years old. But because she doesn’t speak any Spanish, she has to go to the first grade. “I was nearly as tall and fat as I am now – so I must have felt awful.” Today she can laugh about it.

A short while later she catches up and is sent to fourth grade. “I did very well because I found it terribly easy to learn off by heart. But God forbid the teacher interrupted me: they I wouldn’t have known what it was that I said. I just memorised and repeated blindly without understanding a word.” One day she says to her parents, “I won’t go to school any more.” And that was the end of her schooling. Surely, this is one of the reasons why even now she still speaks Spanish with a thick accent, she says. “ All the same, I am Argentinian, she says with a tone of defiance that is characteristic for her. “I have Argentinian children, Argentinian grandchildren and am happy here.”

In Argentina she misses nothing

She visits Germany a number of times. She even shows her grandchildren where she was born. “They were thrilled and I also enjoyed the visit.” But living there again? Absurd! In Argentina she misses nothing.

The German-Jewish community is always important for Lore Brieger. From as early as her teens she works in the children’s home of the Jewish Philanthropic Society (AFI), in Beteinu, like her friend Edith Braun. Und today they work here together, in the Adolfo Hirsch Home. “AFI means a lot to me.” An aunt, her only relative who survived the Shoa, died in this retirement home. Lore’s husband, Heinz, too, spent the last weeks of his life here. But that is 10 years ago by now. “The final six weeks I was no longer able to keep him with me. Their care was very touching and devoted. He was in fantastic hands.” This still makes her happy today.

Lore Brieger’s friends Rut and Edith are still sitting close by. They know her story, but enjoy listening to it once again. All three feel closely connected to the Home. And Lore Brieger feels certain that she wants to live out her life here, when the time comes. She wouldn’t go into an Argentinian home – and her friends agree. Lore says, ”I expect I wouldn’t feel comfortable in a home that’s got Cumbia or Tango playing all day”. Without German music and the German language she wouldn’t feel at home, not even in Argentina.