She is somehow different from the other voluntarias at Hogar Adolfo Hirsch. And she is different from most German Jews. Even her surname doesn't sound very German. Marion Serra is sitting in an armchair, she has made herself comfortable. She folds her hands. Marion Serra smiles and says, "My German is incomplete". She actually speaks as if she were Argentine and learned German at school. Very well, but with charming mistakes. But then she says, "I am German" and tells me that she used to be called Steinbrecher in her German past. 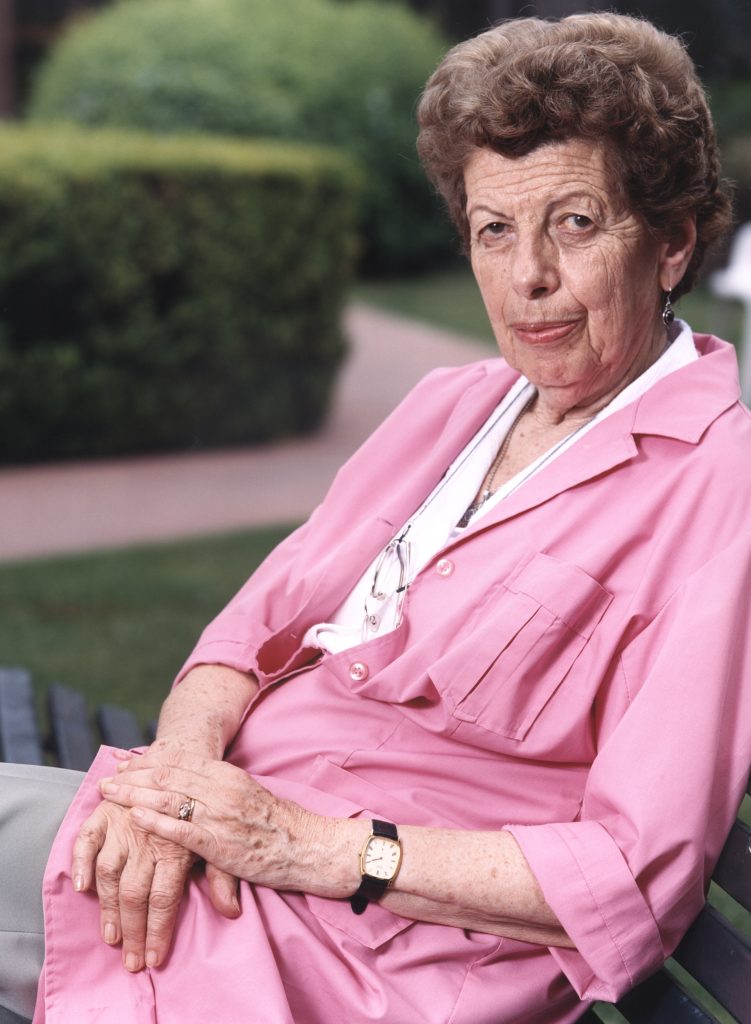 She was born in Berlin on May 27, 1929. She grew up in Lübben until the Steinbrecher family had to move to a pension in Berlin because they no longer had a livelihood in Lübben. At about that point of time Marion celebrates her sixth birthday.

They have to stay in Berlin for two years. "A bad time"

In Berlin, the family is waiting for the llamadas from an uncle who is a diplomat in Buenos Aires. They have to stay in Berlin for two years. "A bad time". She has to leave school, because she is a jew. That is the only thing she remembers. "Once a psicólogo told me that it was as if I had built a wall around it." She remembers the good time in Lübben. "I remember the house. It was a very beautiful house." It was situated on a river "and by this river there were - how do you say in German? - gitanos. Gypsy carts." Her father, a Romanian, runs a fur shop supported by three of his five brothers, and the family is doing well. Marion has a carefree childhood. But one day, in 1935, the Gestapo comes and closes the shop. Customers who had bought fur on credit no longer have to pay their credit dues. The shop is emptied completely from one day to the other. The family is faced with nothing. Marion's father travels to Romania for six months to see if the family can go there. But he also sees no future in Romania. He proposes to the family to emigrate to Argentina. So then first of all they go to Berlin.

Her uncle, who lives in Buenos Aires, fetches his sister and his mother first to Argentina. Then, in 1937, Marion and her siblings and parents travel via Hamburg to the distant country. They sail on a French ship in first-class . "I think this trip could only be made in first class." Steinbrechers had previously sent their belongings ahead in lifts. They can't take any money with them. Marion will celebrate her eighth birthday in her new home, and the 76-year-old remembers how her mother "knitted clothes for my doll all the way throughout the journey, so that she could have presents for my birthday". She enjoys to remember that. Marion is too small to understand what is happening, but she is not too small to suffer in the new beginning. When you see today how strongly she is integrated into Argentine society, you can hardly believe it, but at the beginning Marion Steinbrecher suffered a lot in Argentina.

Although she is already eight years old, she starts into the first class, because she had hardly attended school in Germany and does not speak Spanish. "It wasn't easy for me as a child," she says. Fashion was also different, she and her siblings did not know what dulce de leche or mate is. "And children can be - how do you say? - very, very cruel. It takes about a year for her to feel safe with the new language, "but we were foreigners and when we spoke, people turned around."

Her German past is becoming more and more marginalized

Today nobody turns around any longer. "No one can tell I'm not Argentine." Perhaps her Spanish is without accent, because she falls in love with a spanish Argentinian at the age of 17. "He was my brother's best friend." Her parents are strictly against this relationship because he is not a German Jew. Marion Serra smiles understandingly, "The times were different then." Her mother dies in 1946 and two years later her father, too, and then "I made the best decision of my life". She has a good job as a secretary, so she is financially independent from her family. She says to herself, "I don't care what the family thinks." She marries. However, she had to get an autorización from the judge,, because she wasn’t yet of age. Marion Steinbrecher now becomes Marion Serra and she has two sons. She runs a happy marriage. Her German past is becoming more and more marginalized. She doesn’t speak German with her sons either. Today one of her sons reproaches her for that neglect. But it is as it is.

Germany plays no role in her life. That, too, is part of her suppression. This is, because Germany is the country where many of her family members died. Few can save themselves by going to England, Italy or Palestine. Nevertheless, Marion Serra has no grudge against her country of birth. She is often in Germany, also because her husband frequently travels there for business. "But in Germany I feel like a foreigner." There she feels foreign. "I feel as an Argentine throughout." There was no connection to her origin in her life.

But then - perhaps by coincidence or fate, she says, and her eyes are shining - an acquaintance needed help. His mother was living in the retirement home and he had no car. So Marion regularly takes him to San Miguel. She is 50 years old and is no longer working. „And then I thought, I would like to work here," because she never met her own parents as old people. "Until then, I had no other conección (connection) with the German-Jewish colectividad," she says. That was 26 years ago. "That was my first contact with my German past.“